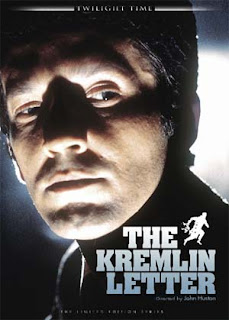 The LA Times reports that Fox will release John Huston's all-star 1970 spy movie The Kremlin Letter in January as part of a new limited edition DVD specialty label, Twilight Time.  Apparently this is Fox's answer to the other studios' MOD programs... but a little classier.  For one thing, these are factory-pressed discs, not DVD-Rs. For another, they'll feature a few more bells and whistles than the bare-bones MOD releases.  According to the newspaper, "Only 3,000 units of each title will be made available for a limited time, geared to the classic-film DVD collector. Besides the disc, the package will come with an eight-page booklet about the movie, featuring original essays, stills and poster art, and in some cases, the musical score." Sounds like quite a nice package! The limited edition, of course, is a similar way to deal with the same problem the MOD programs are trying to address: the sad fact that big box retailers won't allocate shelf space for classic films with unfortunately limited consumer appeal.  One way around that is by producing DVDs on demand, as Warner Archives does; another is commiting to a strictly limited quantity to tap into the collector market demand that the studio knows is there.  To me, this option seems more worth the $19.95 price point than the DVD-Rs. The Kremlin Letter will kick off the Twilight Time series on January 25, 2011, and after that a new title (generally focusing on Sixties and Seventies widescreen titles, which suites me!) will be made available on the last Tuesday of each month.  The DVDs will be available exclusively from Screen Archives Entertainment, an online retailer currently known for soundtrack CDs.

The Kremlin Letter, adapted from the novel by Noel Behn, tells the story of a young Naval Intelligence officer (Patrick O'Neal) recruited by a network of aging spies to retrieve a letter critical to American Intelligence from Moscow. The impressive cast includes Orson Welles, George Sanders, Dean Jagger, Nigel Green, Max von Sydow, Raf Vallone and Huston himself.
Thanks to Camps on the Eurospy Forum for the heads-up.
Posted by Tanner at 11:30 AM

When talking the The Kremlin Letter, special mention must go to Richard Boone. He's the real star of the movie! ("Now, Nephew..."). And if you only know him from "Have Gun, Will Travel", his role here will startle you.

This is the perfect movie for this new format. You're absolutely right - DVD over DVD-R's. And with a writeup to boot. This is one I have to consider buying. It does require frequent viewings to make any sense of it. Timeless, and somewhat weird, spy movie.