In one fell swoop, TNT has disavowed all of its spy shows. After previously cancelling Transporter: The Series, the cable network today (per Deadline) also axed its fun freshman series Agent X, and sophomore Legends. In both cases, this is really too bad. Agent X, starring Sharon Stone and Jeff Hephner, was lots of fun and delivered weekly escapist action in the Alias-vein. Legends, from Homeland and 24 executive producer Howard Gordon, started strong last season but had become absolutely brilliant in its second year after a thorough re-tooling. The Sean Bean spy series based on Robert Littell's novel had become an excellent and worthy companion for Homeland. I will miss this one greatly, and dearly hope that Netflix or Hulu or Amazon Prime scoops it up for a third season. This series has already shown an amazing ability to survive, surfacing on TNT a year after being passed on by NBC, so anything seems possible....
Posted by Tanner at 2:06 AM 3 comments: 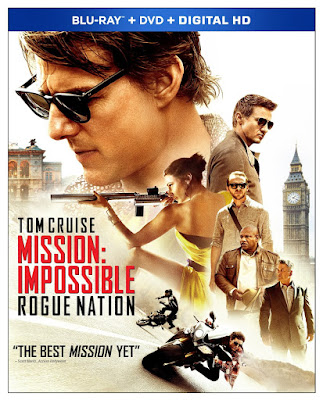 The fantastic Mission: Impossible - Rogue Nation hits Blu-ray today... but it's hardly a clear-cut purchase. Confusingly and infuriatingly, Paramount has given it their Star Trek treatment and released several different versions as exclusives for several different retailers. As usual when the studio pulls this reprehensible crap (Paramount isn't the only offender, but they are by far the worst), they provide no convenient guide that I am aware of as to the differences between the various retailer exclusives or even how many there are. (The official website lists several versions, but provides no useful details as to content.) I'm aware of three, but if you know of others, please share in the comments.

First, there's the regular Blu-ray/DVD combo available from Amazon and other retailers with that cool cover collage. (I like that this art depicts the whole team and echoes the TV season DVD covers... though the artwork might have been even cooler had Paramount gone with the rejected painted version.) This version includes an audio commentary with star Tom Cruise and director Christopher McQuarrie, 45 minutes of bonus features ("Lighting the Fuse," "Cruise Control," "Heroes…," "Cruising Altitude," "Mission: Immersible," "Sand Theft Auto," and "The Missions Continue"), and a digital copy. There is also a standalone DVD (which is absolutely bare-bones, with no extras whatsoever) and, for just twice as much as the Rogue Nation Blu-ray on its own, a 5-disc set including all the films in the series to date. (Handy if you're looking to upgrade previous entries from DVD to high-def.) I'm assuming that this set includes the same version, with the same extras, as the Blu-ray/DVD combo. UPDATE: It does. All of the discs contain the same extras as their individual releases. 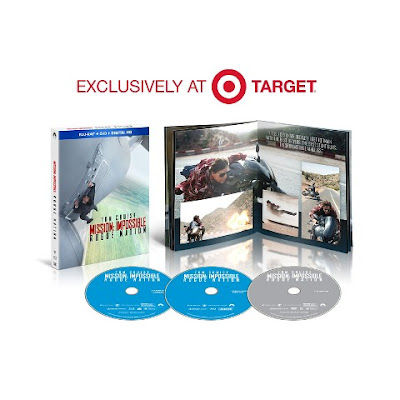 On top of that, Target has an exclusive 3-disc set of Mission: Impossible - Rogue Nation on its own. This includes a Blu-ray, a DVD, a digital copy, and an exclusive bonus disc with "over 50 minutes of exclusive [that word again!] footage as Tom Cruise and Writer/Director Christopher McQuarrie reveal how they conceived, created and filmed the impossible stunts of Rogue Nation, including the mind-blowing airplane and underwater sequences." On top of featurettes on the stunts, it also includes featurettes on Lalo Schifrin's famous theme and composer Joe Kraemer's approach to it, on editing the spectacular opera setpiece, and on the opera itself. The exclusive featurettes are "...And Rogues" (a companion piece to "Heroes..."), "Top Crews," "Travel Agents," Opera-tion  I cannot yet confirm if it includes all the bonus material that's on the regular edition or not. If Paramount follow their own precedent set by Star Trek Into Darkness, then it's entirely possible that this set might be missing the commentary or some other feature found on the regular version. I will update this post as soon as I have an answer. UPDATE: I can confirm that the Target version does indeed include all of the bonus material from the standard edition, making this, in my view, the one to get. Enticingly, this Target version comes in "exclusive packaging [including a] custom book with 48 pages of production images, storyboards, and set photos taking you inside the creation of breath-taking stunts." The cover image is different, sporting the advance poster image of Cruise clinging to the side of the airplane, the film's signature stunt. (Personally I prefer the regular cover because it highlights the team aspect of the latest films in the series, harkening back to the TV show I love, rather than showcasing Cruise on his own.) 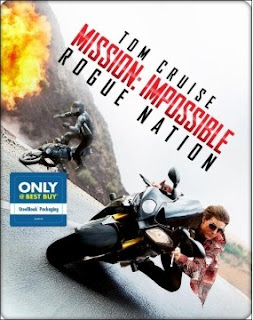 Finally, Best Buy is offering their own exclusive packaging in a Steelbook case showcasing another of the film's exciting stunt sequences, the motorcycle chase. (And, again, only Cruise.) Their website gives no indication of which extras are included (again, I will update this article when I know), but does assure us that the Steelbook contains the Blu-ray, the DVD and the digital copy. UPDATE: The Best Buy Steelbook includes all the features on the standard Blu-ray release (but not the extra ones found on the Target version). Many people like collecting Steelbook packaging, and I admit, they are nice, but I think the book with production art holds more appeal for me personally. I just wish either exclusive version came with the regular cover artwork.

Best Buy is also offering their own exclusive version of the 5-film set, with much cooler packaging, also in the Steelbook vein. 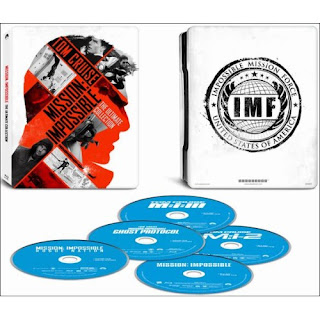 Your mission, should you choose to accept it, is to pick the version that's right for you. Or you could try to send Paramount a message that consumers are fed up with this sort of horseshit by not buying any editions... but then, of course, you'd be missing out on owning one of the most entertaining spy movies in years. (Plus, I abstained from buying Into Darkness in outrage, and obviously the studio didn't get the message when tallying up their books and finding they were roughly $17.99 short of their expected sales goals...) But I certainly wanted to post a Buyer Beware alert before you go out and get the wrong version, and end up disappointed.
Posted by Tanner at 3:01 AM 1 comment: 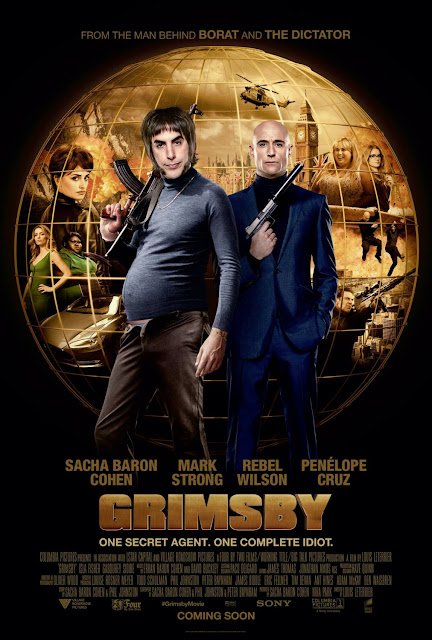 Following on our initial glimpse in a red band trailer in October, Sony has now released a new all audiences trailer and a poster for The Brothers Grimsby (or is it just Grimsby? It appears to be one domestically and another internationally), the Sacha Baron Cohen/Mark Strong spy comedy we first heard about way back in 2012, when it was set up at Paramount. Spy veteran Mark Strong (Kingsman, Tinker Tailor Soldier Spy) plays a British superspy saddled on his latest adventure with his idiot soccer hooligan brother, played by Cohen (Borat). Louis Leterrier, whose Transporter 2 remains one of the very best neo-Eurospy movies to date, directs, so hopefully we can expect some good action along with the comedy. The film was originally set to come out this past summer, but ultimately relocated from the crowded 2015 spy marketplace to a February 2016 berth. I have a feeling this could be the spy comedy hit of next year that Spy was this year.

Chris Haddock, the creator of the 2005-07 Canadian spy drama Intelligence, has a new spy show on the air in Canada. The Romeo Section premiered this fall and airs Wednesdays at 9 on CBC, exploring the world of sparrows, sexpionage and honeytraps. I hope Acorn Entertainment eventually releases this one in the United States (or at least puts it on their streaming platform), as they did with Intelligence. Check out the trailer:

Thanks to Scott for the heads-up!
Posted by Tanner at 7:30 AM No comments:

ABC had to revise their winter schedule when it was announced that the 2016 State of the Union address would be delivered a few weeks earlier than usual. President Obama will speak on January 12 instead of the traditional end of the month time. ABC had planned to debut the new season of Marvel's 1940s spy series on January 5 with two back-to-back episodes. Not wanting its flow interrupted so quickly, Deadline reports that the network will now wait until after the State of the Union and air the season premiere on January 19. Unfortunately, that presumably means a few more weeks of back to back episodes, since they have to be done in time for Agents of S.H.I.E.L.D.'s return to that timeslot on March 8. The S.H.I.E.L.D. dates are probably not very flexible, since the series usually syncs up with the big Marvel theatrical releases, and Captain America: Civil War opens on May 6. Watch a trailer for the new season here.
Posted by Tanner at 1:25 PM 1 comment:

Trailer: Eye in the Sky