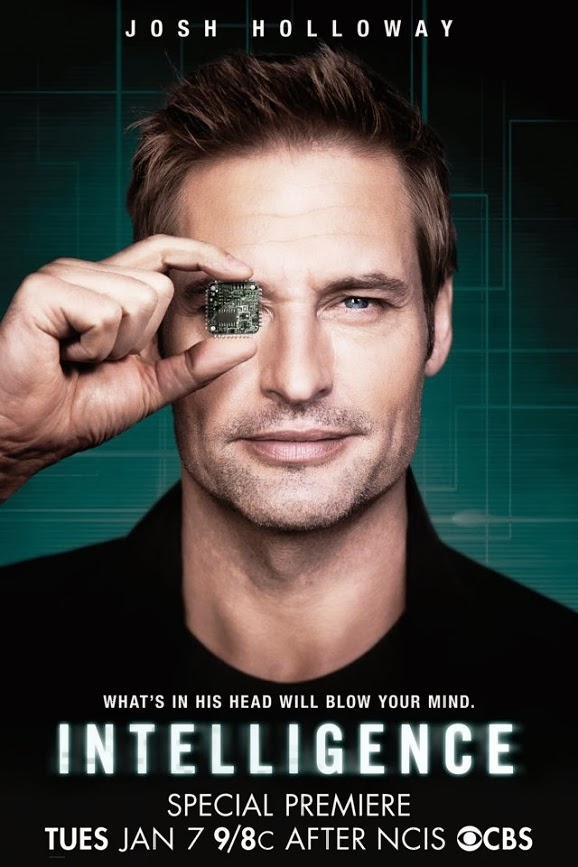 CBS’s new spy series Intelligence stars Josh Holloway (Mission: Impossible – Ghost Protocol, Lost) as a secret agent with a microchip in his brain that gives him special powers. (I’ll get into those in a minute.) The logline sounded like Chuck played straight (or a Six Million Dollar Man for the cyber era) when it was first reported, and that’s essentially what it is. Which, on its own, is neither a bad thing nor a good thing. The pilot is expectedly exposition-heavy, but when it comes down to it I suspect the success of this series will depend more on its stars than its not-entirely-fresh (and not entirely successful) premise. And, fortunately, Holloway seems born to play a cocky superspy! (As evidenced in his five minutes of screen time in Ghost Protocol.)

Holloway plays Gabriel Vaughn, a former special forces soldier who’s had a microchip implanted in his brain to… Well, for all the clunky exposition we’re treated to in the pilot (and that makes up about half the episode’s runtime), I have to confess I’m not entirely 100% sure exactly what it does. It kind of seems to have the amazing power to suit the writers’ specific needs at any given moment. But for starters, we meet Gabriel in the middle of the Himalayas at a remote military compound on the India/Pakistan border. By looking at a giant satellite dish, he’s able to “see” the SIGINT (Signals Intelligence) it’s recently transmitted. Not only that, but he’s able to pause the scene of a major terrorist attack that seems right out of Strike Back and then walk through it, observing every detail from every angle. And in those details he discovers that a CIA agent (who we later learn is his wife, who’s been in deep cover for two years!) apparently took part in the attack. Then some soldiers turn up and capture him, and he gets to do some cool old-school spy stuff that doesn’t depend on any chips… and then he somehow opens a door with his mind. Granted, it’s a door controlled by an electronic keypad, but still, he seems to open it with his mind. So that’s where we get the whole thing about his powers being at the whim of what the writer thinks would be cool in a given moment. And, personally, I’m not so into the superhero stuff. I prefer my TV spies to rely on their wits and their fists and a few believable gadgets, but not something that basically amounts to magic. And after this brief magic moment it’s mercifully back to regular spyjinks, and the cold open ends up competently marrying the pre-credits sequences from Tomorrow Never Dies (military compound in Pakistani mountains) and GoldenEye (jumping off of a giant, dam-like cliff).

Once we’ve seen Gabriel’s amazing powers in action, the pilot switches back to the States determined to fill us in on what exactly is going on. To do this, we’re introduced to audience surrogate Riley Neal (Meghan Ory of Once Upon a Time), a Secret Service agent summoned to a secret facility (the U.S. Cyber Command, which the show takes great pains in assuring us is not related to the CIA) where she’s offered a job she never applied for by an enigmatic spy boss named Lillian Strand (CSI’s Marg Helgenberger). That job is using her experience from the Presidential Protection detail (we learn that she wasn’t just a Secret Service agent; she was the best Secret Service agent!) to protect, as Lillian puts it, “the most valuable piece of technology this country’s ever created.” Or, as Gabriel puts it, “following around a charming devil with a microchip in his brain.” Gabriel doesn’t want a babysitter (“So that girl’s supposed to keep me in line, huh?”), and Riley doesn’t want the job (for no particularly compelling reason that I can tell other than checking the “refuse the call” box on the writer’s Hero’s Journey worksheet), but by the end of the episode they seem firmly paired.

Lillian and her team of scientists outline the Clockwork Project (as Gabriel and his enhancements are known) for Riley, explaining, “We connected a human being directly to the information grid. Internet, wifi, telephone, satellite…” (That single line would have sufficed for all the exposition in the episode. The more detail they try to go into, the less credible it all sounds.) So he’s basically a one-man NSA. Not great timing there, CBS, as the NSA isn’t exactly popular right now… but then again the faceless NSA doesn’t have Josh Holloway’s charming-devil eyes.

The actual plot of the week kicks in when the neuro-Geppetto scientist who ran the project (Gabriel’s cyber “father”) is kidnapped by the Chinese. You see, he also created another chip, and now the Chinese want him to implant that into one of their (female) agents, conveniently creating a beautiful femme fatale antagonist for Gabriel. (You can’t have The Six Million Dollar Man without the Bionic Woman, can you? Or Archer without Bionic Barry?) For a minute it looks like they’re actually playing U.S. vs. China spy games on Intelligence, of the sort that can’t be depicted in movies anymore because Hollywood is so desperate for those all-important Chinese dollars… but then it turns out that TV is after that market as well. This bad Chinese agent just happens to have been recently disavowed by his government (just like Wo Fat on the new Hawaii Five-0) and gone rogue, so his actions absolutely don’t reflect those of the benevolent Chinese government! (Absolutely, China, we promise!) At this point we also meet Gabriel’s requisite techie backups, including a fat, long-haired geek named Amos and a skinny, spectacled geek named Nelson. Unlike Chuck’s scene-stealing Nerd Herd, however, neither manages to break out of hackneyed stereotype territory in the pilot.

Gabriel spots a cyber-clue that takes him and Riley to Chinatown. In keeping with the post-Alias spy TV tradition (Undercovers, Exit Strategy, etc.), we’re alerted to foreign (or even just quasi-foreign) locales via localized hip-hop. Mandarin (possibly?) rap fills the speakers as our half-bionic duo takes on Chinese gangsters in an exciting gunfight and eventually an exciting hospital fight. Intelligence is at its best when engaging in traditional action-adventure stuff like this, and not trying desperately to explain its inexplicable high concept. Hopefully the pilot proves the only time they bother with attempts at exposition, and the Intelligence brain trust will just have fun with their silly premise from here on in! Because it is fun if you allow yourself to just go with it and take a ride with the appealing leads. Holloway perfected the charming devil act on Lost and puts it to good use here, and Ory (a brunette, in stark contrast to the recent tradition of pairing impossibly young blond female agents with irascible males on Fringe, Alcatraz, The Black List and more) sometimes channels a young Sandra Bullock. Their chemistry together is promising, and because his ongoing story arc involves a search for his missing wife (whom he refuses to believe has really turned traitor), any sexual tension should convincingly remain just that (in Avengers territory) and not jump the Moonlighting shark anytime soon.

Without being weighed down by nonsensical quasi-scientific exposition, Holloway and Ory should be able to keep Intelligence watchable and entertaining. The constant (and constantly deficient) exposition in the pilot put me off, but there’s an enjoyable spy series with compelling leads itching to come out, so I’ll be tuning in again next week in hopes that that happens.
Posted by Tanner at 10:23 PM

Very interesting. No UK pickup yet... but I plan to check this out.

PS The lady in The Blacklist is a brunette too.