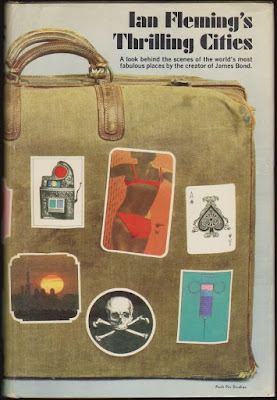 Sharp-eyed agents at MI6 (the mega-Bond fansite, not the spy agency) noticed a very interesting item buried within a Hollywood Reporter story about actor Michael Weatherly's departure from the hit TV series NCIS. Musing about future prospects, Weatherly told the trade that his production company, Solar Drive Productions, is working on adapting Ian Fleming's 1963 non-fiction travelogue Thrilling Cities into a possible TV series. That's a very exciting prospect! Evidently, Weatherly thinks so too, telling the trade, "All of it is so exciting, but I'm really not allowing myself to get too excited about it until the final episode of NCIS airs." No further details are provided. Would this be a travel/reality series, or a drama? Would it be set in today's most thrilling cities, or the same ones Fleming found thrilling in the early 1960s? Would it be a period piece? All of these prospects are intriguing. Weatherly founded Solar Drive in 2014, strking an overall development deal with CBS Television Studios on a mission to create  "inventive, adrenalized, powerful hit series in every platform"... which doesn't seem to narrow down the possibilities. It seems unlikely, however, that Weatherly would star in a drama version; he's already committed to another new CBS show, Bull, so most likely he'll be involved only in a producing capacity. Whatever they ultimately come up with, it's important to note that development is a long way from being on the air. Fingers crossed though! I would love to see another Ian Fleming property on screen, even if the final product bears only a nominal relationship to its original inspiration. The property someone really needs to develop, though, is The Diamond Smugglers! Imagine posters touting so-and-so as "John Blaize, the other hero from the creator of James Bond!"
Posted by Tanner at 8:26 AM

Of course, this is the second attempt at developing Thrilling Cities as a TV show. The first attempt, in 1962, resulted in something much different -- The Man From UNCLE.