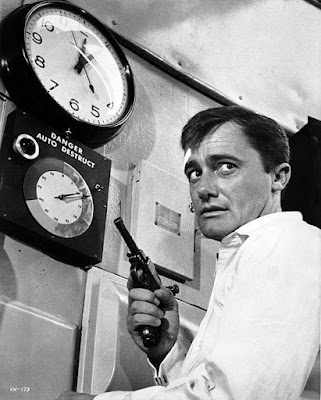 We have lost another pillar of Sixties spydom. The Man From U.N.C.L.E. himself, Robert Vaughn, has passed away at 83.

While no one would deny that it was the partnership of Napoleon Solo (Vaughn) and Illya Kuryakin (David McCallum) that made the show special, Man From U.N.C.L.E. fans tend to be divided on their favorite agent. I've always been a Solo man. Initially conceived by Ian Fleming, Solo was intended to be a TV version of James Bond. That's easy enough on paper, but as we've seen in countless Eurospy movies (as well as various TV attempts at the formula), in practice, it's easier said than done. Really only a handful of actors successfully managed to imbue their superspy characters with the suave charm that defined Sean Connery's 007: James Coburn... Richard Johnson... and, of course, Robert Vaughn. While producers Sam Rolfe and Norman Felton undoubtedly contributed to Solo's character, it was really Vaughn who made him so likable. Let's face it: the spy genre is full of suave charmers. Ultimately, it comes down to the actors to make that charm real. And Robert Vaughn had charm in spades! In short, he was cool. Thinking of this coolness, what leaps immediately to my mind is not one of his many genuinely clever witticisms. It's a line that would be cringe-worthy on the tongue of... really, just about anyone! In the U.N.C.L.E. movie To Trap a Spy, the beautiful Lucianna Paluzzi (Thunderball) seductively asks Napoleon, "What would you like me to change into?" To which the debonair secret agent replies, "Anything... but a boy." (Surely part of the success of The Man From U.N.C.L.E. among children was that it sometimes served up the very same scenarios and lines that they came up with while playing James Bond with their spy toys and costumes!) You simply had to be cool to deliver a line as corny that... and even make it sound sophisticated. Iconic as the character became, audiences didn't tune into The Man From U.N.C.L.E. for Napoleon Solo. They tuned in for Robert Vaughn.

While The Man From U.N.C.L.E. is Vaughn's towering legacy, it wasn't his only brush with espionage. His half-hour Gerry Anderson-created ITC series The Protectors (1972-1974) also carries my high recommendation for spy fans. At the time, Lew Grade was importing a lot of American stars from the previous decade to headline his trademark adventure shows, and Vaughn acquits himself far more admirably in this context than some of his colleagues! (Cough, Gene Barry, cough.) While the character remains a bit of a cypher owing to the half-hour runtime, his jetsetting detective Harry Rule embodies all of that Vaughn charm and coolness that gave life to Napoleon Solo. And I suspect that Vaughn is probably the only actor to fight fully kitted-out scuba divers on dry land (or deck) in two separate series! (The Protectors actually takes the prize in that category, because the fight involves swordplay.) In my book, that's an honor worth noting. Vaughn also orbited the spy world in the shows Washington: Behind Closed Doors (giving an Emmy-winning performance as the Bob Haldeman character opposite former Girl From U.N.C.L.E. Stefanie Powers in a miniseries based on John Erlichman's roman a clef about Watergate) and The A-Team.


On the big screen, his best spy role came in the 1966 Helen MacInnes adaptation The Venetian Affair opposite Elke Sommer. Though its evocative title (which actually came from the novel, despite sounding like an U.N.C.L.E. episode name) and lurid marketing ("Enjoy the Fine Arts of Venice... Murder! Spies! Women!") clearly aimed to capitalize on Vaughn's television success, the film is actually far more serious and downbeat than the fanciful Man From U.N.C.L.E. Like its atmospheric, harpsichord-heavy Lalo Schifrin score, it has far more in common with The Ipcress File and The Quiller Memorandum. Vaughn's most famous film roles came outside the genre in movies like The Magnificent Seven, Bullitt, The Mind of Mr. Soames, The Towering Inferno, Battle Beyond the Stars (in an homage to his Magnificent Seven roots) and Superman III, but he continued to make spy movies of varying quality throughout his career, including Brass Target (with Patrick McGoohan), Cuba Crossing, Hour of the Assassin, Skeleton Coast, and, of course, the 1983 telefilm The Return of the Man From U.N.C.L.E.

Off screen, Vaughn was known for his liberal politics. A lifelong Democrat, he continued his education after wrapping The Man From U.N.C.L.E. and wrote his doctoral dissertation on the Hollywood blacklist. A former Army drill instructor himself, he was active in the antiwar movement, campaigning for Eugene McCarthy and memorably locking horns (and more than holding his own) with conservative talk show host (and spy author) William F. Buckley, Jr. (Their articulate debate on Buckley's Firing Line is well worth watching, epitomizing the late Sixties political schism in America.)

In the late period of his career, Vaughn riffed on his U.N.C.L.E. persona in a fun, nostalgia-driven guest appearance on Diagnosis Murder before creating one more indelible role on the highly entertaining U.K. con artist series Hustle. As Albert Stroller, he still conveyed all the charm and charisma that made Napoleon Solo a household name four decades earlier.

Robert Vaughn was a class act and an icon of the spy genre. To say he will be missed is a gross understatement. We have lost one of the titans of popular culture espionage.
Posted by Tanner at 2:47 PM

I have heard in the news. Really sad news it was.

Especially sad that Mr Vaughn succumbed to a rather sudden bout of severe illness rather than simply old age. Otherwise I suspect he'd have been around for a good while yet.

As you point out, suave, cool, action heroes are a dime a dozen. And, at the peak of the spy-fi boom in the mid-1960's, they were about a dime for two dozen. It's a tribute to Mr. Vaughn's talent and charisma that Solo became more than just a pale imitation of James Bond.

I don't want to get into a "Solo vs. Illya" argument. IMHO, each character was at his best when playing off of the other, and the stars had great chemistry.

The first episode of The Protectors implied that Rule was divorced and had a child, but I don't remember if that was ever mentioned again. So, yes, he remained something of a "cypher," as the half-hour format did not leave room for much character development. But the show was entertaining enough for action-adventure fans.

For some reason, The Protectors, The Adventurer, and The Baron never really caught on in the US. Somewhat ironically, the most popular British spy and/or detective shows with American audiences were the ones with British stars: The Saint, The Avengers, and Danger Man/Secret Agent.

But, as Napoleon Solo, Vaughn became an icon. To this day, "The Man From U.N.C.L.E." is used almost as often as "James Bond" as a metaphor for espionage and international intrigue.

Yes, that was the irony of Grade's insistence on American stars for later ITC series. It didn't actually worked how he hoped it would, growing the American market! I think American audiences probably liked the relative exotic quality of British stars. There's no question that we yanks tend to think of Brits as "sophisticated," rightly or wrongly. Whereas there were PLENTY of other options for shows starring people with American accents! So the American leads actually made the shows less special, even if they were familiar faces. That said, I think Vaughn and Tony Curtis really worked out well!

The Man From U.N.C.L.E. has been running on the Heroes and Icons channel. The prints are in great shape. It's a pleasure to revisit the show, entertaining, funny, fantastic music, clever scripts and dialogue and performers who spoke in complete sentences compared to contemporary acting styles.