New Spy Blu-Rays Out This Week: OSS 117 and DIMENSION 5 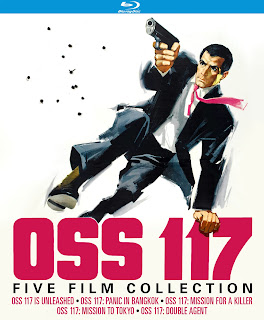 Kino-Lorber unleashed a tidal wave of Sixties spy goodness (and a little enjoyable Sixties spy mediocrity as well) in high definition this week. The main attraction is definitely their OSS 117 Five Film Collection, a glorious box set of five of the best Eurospy films of all – the Andre Hunebelle-produced OSS 117 movies. The B-picture on this bill is Dimension 5, an American poverty row spy picture from 1966 best known for co-starring Oddjob himself, Harold Sakata, as the Yellow Peril baddie, Big Buddha. None of these movies have been available before in America in legitimate digital form, so Kino are also offering both the OSS 117 set and Dimension 5 in standard def on DVD.

The OSS 117 Five Film Collection doesn't include all the OSS 117 films, but it does include all the Hunebelle-produced ones, which are the ones that matter most. Kerwin Mathews (The 7th Voyage of Sinbad) stars in the first two, Frederick Stafford (Topaz) in the next two, and John Gavin (the American actor who was actually cast as James Bond in Diamonds Are Forever before a record-setting million dollar payday lured Sean Connery back into the fold) stars in the final film. While most audiences are probably familiar with Agent OSS 117 (if at all) through the superb Jean Dujardin spoof movies from the 2000s, Jean Bruce's literary character actually pre-dates 007. Hubert Bonisseur de la Bath, code name OSS 117, appeared in over 200 novels and a handful of films, of which the ones presented here are the most essential. For more on OSS 117, read my in-depth overview of the character and his screen appearances here.

I've reviewed each of these movies individually before, but off of gray market English-dubbed DVDs. I'll update my reviews soon to address the Kino Blu-rays, which appear to use the same HD transfers as the recent French Blu-rays from Gaumont. OSS 117 Is Unleashed (1963, review here) may be black and white, but it's a few years ahead of From Russia With Love, incorporating terrific underwater action with its villains' lairs and breathtaking European locations well before Bond ever made a dive on screen. OSS 117: Panic in Bangkok (1964, review here) follows Mathews to Thailand, where he takes on a caped supervillain. OSS 117: Mission for a Killer (1965, review here) introduces Stafford, co-starring with the jaw-droppingly gorgeous Mylène Demongeot (Fantomas), one of the most beautiful Eurospy babes of all. They hunt Nazis in Brazil, providing a lot of the basis for the later Dujardin parody movies. OSS 117: Mission to Tokyo (1966, review here) is my favorite film of the batch, and again beats Bond to the punch on multiple counts, including many Tokyo locations, geisha baths, and a ship with a bow that opens to swallow up smaller ships. It's tempting to credit the extra Bondian touches to co-writer Terrence Young (director of several seminal Connery Bond flicks), but his actual involvement is said to have been minimal. OSS 117: Double Agent (1968, review here) has plenty of Bond connections of its own. Beyond star Gavin being a notable footnote in 007 lore, legitimate Bond players Luciana Paluzzi (Thunderball) and Curd Jurgens (The Spy Who Loved Me) also star. For my money, Jurgens actually makes a more memorable OSS 117 villain than Bond villain.

All five films are top-tier Eurospy movies. They've also got considerably higher budgets than most Euro flicks of the era (though still not in the Bond league, of course), making them great stepping stones from 007 into the world of his imitators. From what I've had a chance to sample, the high-def transfers look fantastic. My only gripes with Kino's set are that they didn't port over (and sub) the copious extras from the French DVD set, and, more crucially, that they didn't include English audio options. All of these movies were originally dubbed (and quite well) for American release. According to Kino, they were unable to locate those elements in a condition that matched the quality of the remastered picture. Alas. But the English subtitles are excellent, and the French audio sounds great. Overall, this is probably the best treatment any Eurospy movies have ever been given in the United States! And at just under $35 on Amazon, this set is a deal no Bond fan or Eurospy fan can pass up! 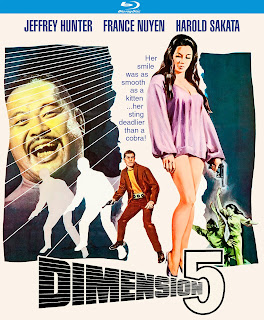 Original Enterprise captain Jeffrey Hunter is Justin Power, the spy tasked with taking out Big Buddha in the decidedly lower budgeted Dimension 5. Hunter is a compelling enough leading man, but Power is an unmitigated jerk in the worst Eurospy tradition – and a fairly inept agent to boot. France Nuyen (familiar to spy fans from her many episodes of I Spy) is his Chinese-American support who has all the good ideas, most of which Power ignores since she's a woman. (So astonished is Power when his cut-rate Mr. Waverly boss assigns him a partner with a tiny waist size that the guesses "small boy" and "dwarf" occur to him before female.) Since he can't rely on his wits, Power has to rely on the most preposterous spy gadget ever, a time travel belt. It's slow and it's bad, but if you're a fan of the genre, you probably still need it! Dimension 5 has long deserved a home video release of some sort; I'm kind of shocked the sort ended up being a remastered 4K HD scan! It still doesn't look that great... but it sure looks a heck of a lot better than the grey market copy I reviewed back in 2008. Read that review here.

Please order through the links on this page to support the Double O Section!

I saw Dimension 5 on YouTube last year, and thought it was pretty good. But then, I had watched the 1960s version of Modesty Blaise the night before, and after that, almost anything would seem good by comparison.

Haha! Well, personally, I rate Losey's MODESTY BLAISE a lot higher than DIMENSION 5 for style alone... though certainly not substance. The KL Blu-ray of D5 is certainly higher quality than the bootleg I'd seen (which is probably what's up on YouTube), but it's not a particularly amazing transfer.