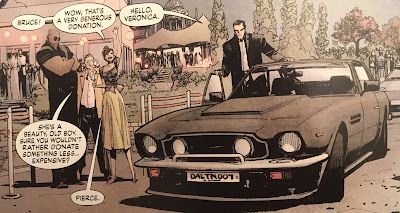 In issue #2 of Sean Murphy's Batman: White Knight miniseries, on shelves today, a tuxedoed Bruce Wayne is shown arriving at a party in a car instantly familiar to James Bond fans. And, should there be any doubt, Murphy has given it the license plate "DALTON007." The car, of course, is the Aston Martin Vantage driven by Timothy Dalton as Agent 007 in The Living Daylights (1987). And Murphy, who is best known for Vertigo titles like American Vampire, Joe the Barbarian, and Punk Rock Jesus, sure draws it nicely! (Man, I would love to see him do a Bond comic for Dynamite....) Bond himself was drawn driving this car by John M. Burns in the 1993 Dark Horse miniseries James Bond: A Silent Armageddon.

Of course, this is far from the first Aston Martin originally made famous by Bond to be driven by Bruce Wayne. In fact, Batman's playboy alter-ego has a fairly extensive history with the marque. He's been drawn driving Astons in several comics, most notably when artist Jim Lee put him in a Vanquish in the third issue of his and Jeff Loeb's landmark Batman story, Hush. That was in 2002, the same year that Pierce Brosnan drove a Vanquish in Die Another Day. But the association has also been present in movies. I think it was James Bond screenwriter Tom Mankiewicz who first put Bruce Wayne in an Aston Martin in his unfilmed 1983 Batman movie script. Zach Snyder finally realized that ambition onscreen in his (otherwise abysmal) 2016 movie Batman vs. Superman, in which Ben Affleck's Bruce Wayne drives a classic 1950s Aston Martin DB Mk III, the very car that Ian Fleming had 007 drive in his novel Goldfinger! (By the time the story was filmed, it made sense to update it to the then-current DB5, and thus history was made.) The same type of car might also be familiar to spy fans from appearances in the premiere episode of Danger Man,  and in the Man From U.N.C.L.E. Season 2 episode "The Children's Day Affair."

For more on Batman/Bond connections, check out this 2008 article, "His Name is Wayne, Bruce Wayne."
Posted by Tanner at 11:35 PM