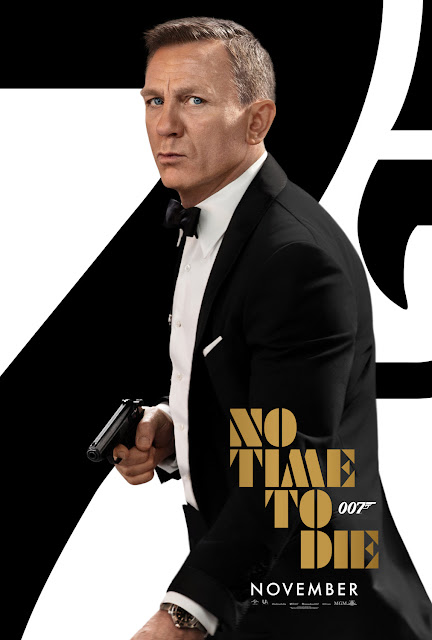 This week MGM has ramped up the campaign for Daniel Craig's long awaited and highly anticipated fifth James Bond movie, No Time To Die. And as fans are painfully aware, this is actually the film's second campaign. No Time To Die had a whole advertising campaign back at the beginning of this year leading up to a hoped for April release, including many posters and even the much publicized, chart-topping release of the movie's excellent theme song by Billie Eilish. But, as we all know, the global pandemic came along and the April release was scrapped. Since then the film has been set for a November release, though even that has been uncertain given the unpredictable nature of the novel coronavirus. Now it certainly looks like EON, MGM, and distributors United Artists and Universal are doubling down on that November release! The date is proudly proclaimed across this brand new poster (frankly a little uninspired compared to the less typical previous campaign's 1-sheet) and in the brand new second trailer. And it's quite a trailer! As far as I can recall, this marks the first time a Craig Bond movie has had this kind of text tagline: The mission that changes everything begins!
Posted by Tanner at 10:05 AM

I would say that the wait is killing me, but it's not like there aren't other things occupying my thoughts these days. Still, greatly looking forward to this one.
And yes, the whole "This mission changes everything" tagline has me a little worried. Do I want to see Bond retire as 007? Again?
I have a theory that, since this is Craig's swansong in the role, might EON try starting from scratch and re-make every film for the modern world, starting with 'Dr.No"?
That would be interesting.
Let's hope NTTD is a good one. Fingers crossed.
And stay safe, Mr Tanner!

After Craig's 2015 comment about playing 007 again, I completely lost interest. I didn't feel that way about Connery because Connery was a much better Bond. Craig is less a spy than an inarticulate thug in a nice suit. Lazenby was a better Bond.