Movie Review: Erased aka The Expatriate (2012) 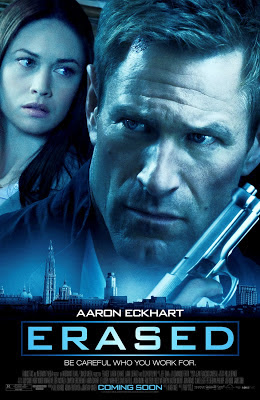 The latest neo-Eurospy movie to hit American screens barely hit them at all; Erased (which came out in other territories last year as The Expatriate) was unceremoniously dumped in a handful of theaters with zero advertising by The Weinstein Company. And it’s a bit of a shame, too, because it’s a decent flick that might have done some decent business if given half a chance. When it comes to the neo-Eurospy subgenre, it’s no Taken, but it’s definitely better than Taken 2. It’s also a far sight better than star Aaron Eckhart’s last action movie, Olympus Has Fallen, and that managed to do impressive business. Of course, Eckhart shared the bill there with Gerard Butler. But despite being most famous for supporting turns (like The Dark Knight), he’s got the chops to carry a film and does well in a spy role here.

Eckhart plays Ben Logan, a former CIA agent who specialized in, well, killing people. He was drummed out of the Agency—and America—when terms like “kill squads” went out of favor, apparently—though I’m not completely sure that particular term was ever in favor. Isn’t that why euphemisms like “wetworks” and “black ops” were invented? Unable to return home, the titular (in Europe, anyway) expatriate now works for a private security firm in Antwerp, Belgium. He’s also trying to form a relationship with his estranged teenage daughter, Amy (Liana Liberato), who resents having to leave her school in Connecticut to come live with a dad she barely knows after losing her mom—Ben’s ex-wife—to cancer. The dialogue between father and daughter may be a little bit on the cheesy side (though nowhere near as egregious as in the first Taken), but Eckhart and Liberato have excellent chemistry and they sell the strained relationship easily.

Ben works late one night after discovering a patent discrepancy in one of his company’s security devices, and then, ignoring the friendly security guard’s advice to go home and hit the hay, makes a predictably late entrance to Amy’s school presentation. In an attempt to mollify his understandably angry (and hungry) daughter, he offers her some food, not realizing that she has a peanut allergy. They end up spending the night in the hospital, and she has no choice but to accompany him on a stop at his office the next morning. But the office is gone. All the furniture and equipment have been cleared out, and there’s no sign of any of the people. When Ben calls the corporate headquarters in Brussels, he’s informed that the company has no Antwerp office. 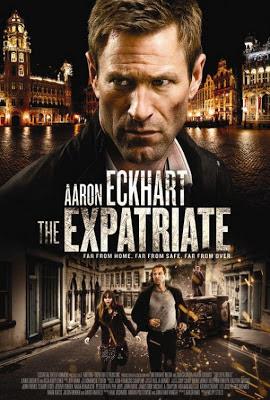 He runs into a coworker, but rather than collaborating to solve this mystery, his former colleague carjacks Ben and Amy at gunpoint. Ben’s spy instincts kick in, and he ends up in close-quarters combat with the colleague-turned-assassin as the car careens dangerously along the highway. Amy looks on in terror as the fight results in a spectacular wreck, the death of the assassin who might have been able to give them some answers, and ultimately father and daughter on the run from the local law enforcement.

Ben has no choice but to bring Amy along on his quest to find answers, and he teaches her some handy Jason Bourne-style tradecraft along the way. (Like how to blend in in a crowd.) That relationship is really the best part of Erased. When I first reported the logline way back in 2010, I somewhat snarkily remarked that it sounded like a cross between the Liam Neeson movies Taken and Unknown. But the daughter storyline in Erased is very different from that in Taken. Whereas in Taken father and daughter are separated and Neeson’s Bryan Mills demonstrates he’ll do anything to find his daughter, in Erased they are together. And that’s a twist I haven’t seen before in this sort of spy movie: an agent on the run with his daughter, bonding and bickering with her as he dispatches cadres of enemies. 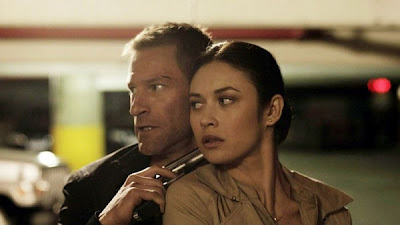 The Ludlumesque setup isn’t as Unknown as it sounds, either. In fact, a disturbing trip to the morgue confirms to Ben that it’s much more of a Three Days of the Condor situation; the rest of his co-workers are all dead, as he would have been had he gone home that night (as the security guard suggested) instead of to the hospital. Ben’s investigation into this scenario takes him and Amy from Antwerp to Brussels, affording the audience some very nice European travelogue shots, and into contact with spy veterans Olga Kurylenko (Quantum of Solace, Hitman) and Garrick Hagpn (The Adventurer, The Spy Who Loved Me). Kurylenko plays Ben’s former CIA controller, Anna Brandt, though her present loyalties are decidedly in question. I’ve been a fan of hers since before she was a Bond Girl, and I’m always happy to see her in a spy movie. But honestly her role here is somewhat limited; I would have liked to see more of her. Still, she’s good in the scenes she has, and her presence automatically elevates any spy movie! Hagon plays the enigmatic and somewhat sinister CEO of the company Ben believed himself to be working for. There’s also the friendly security guard from his old job to contend with, who proves himself to in fact not be very friendly, but a psychotic and seemingly unstoppable killer. The violent fight between Ben and him in a hospital is the film’s action highlight, easily rivaling the similar sequence in The Bourne Legacy. Late in the film, we’re also introduced to an even more unstoppable French “cleaner” played by Jean Reno lookalike Eric Godon. The role would have had more impact had the producers been able to secure Reno himself. 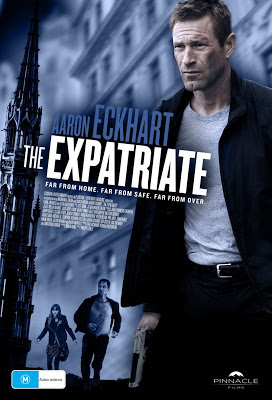 Erased has all the right ingredients: good actors, good action, good locations, and an intriguing premise. But somehow they don’t gel quite right. The pacing is off, and I can’t quite put my finger on why. The plot moves along from one turning point to another at more or less the right intervals, and the action scenes come in good succession. Nevertheless, it still manages to feel much longer than its actual 100-minute runtime. Overall, though, the good elements outweigh the bad. I can put up with slow pacing in exchange for engaging performances from likable stars and a good neo-Eurospy plot. Erased deserved a wider theatrical release with some real advertising behind it. It’s a more rewarding viewing experience than the last neo-Eurospy release, Taken 2, and that one managed to rack up a whopping $376 million worldwide! So this one deserved a shot. Well, hopefully viewers will discover it on demand (where it can currently be seen), or on DVD and Blu-ray come July. At least then it can justifiably put Liberato on the map; her performance here promises a career worth watching. And Eckhart’s shows he has what it takes to be an action star; let’s hope he gets another chance in a bigger movie.
Posted by Tanner at 1:52 AM