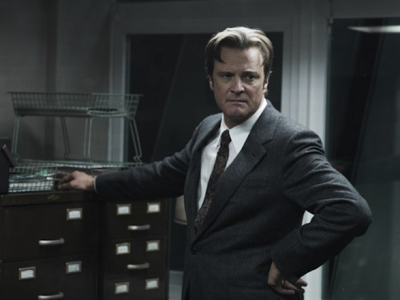 Tinker Tailor Soldier Spy's Colin Firth is looking to renew his spy vows in two very different sorts of spy movies. The actor is in talks to star in both Matthew Vaughn's action comedy The Secret Service, based on the comic book

by Vaughn, Mark Millar and Dave Gibbons, and A Foreign Country, based on the 2012 thriller by acclaimed spy novelist Charles Cumming. According to The Hollywood Reporter, Firth is in talks to play the co-lead in The Secret Service. The Secret Service is a teen spy movie (a subgenre I'd love to see rejuvenated) about a rowdy street kid recruited into the secret service by his James Bond-ish superspy uncle (the character Firth would play) in order to save him from a life of crime. He doesn't exactly hit it off with his posh public school fellow students at the spy academy, but is able to hold his own thanks to his rough background. Like Millar's Kick-Ass, it's all very over-the-top, with flying spy cars and the like.

Meanwhile, Screen Daily reports that Firth's new production company, Raindog Films, is partnering with Zurich financier Silver Reel Partners on a $30 million adaptation of Cumming's A Foreign Country, a much more down-to-earth spy story. The book won the 2012 Ian Fleming Steel Dagger Award for Best Thriller, and is the first novel of a projected trilogy, making it a potential screen franchise. Firth would play disgraced former MI6 operative Thomas Kell, who is tasked with finding Amelia Levene, a fellow spook who disappears on the eve of taking over as MI6's first female director. Locations include Paris, Egypt and Tunisia, where, according to the book jacket, "he uncovers a shocking secret and a conspiracy that could have unimaginable repercussions for Britain and its allies." I'll have to take their word on that, because I haven't gotten to the unimaginable repercussions yet. I'm actually in the middle of this book right now, and thoroughly enjoying it, so I'm excited at the prospect of a film! Interestingly, Firth starred in a (sort of) spy movie at the very beginning of his career with the similar title Another Country (about the formative years of Cambridge spy Guy Burgess).
Posted by Tanner at 5:18 PM