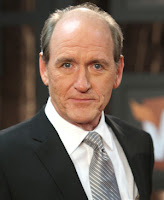 Olen Steinhauer's Berlin Station has its first agent. Richard Jenkins (Burn After Reading, Undercover Blues) will play the Chief of Station, a Cold War veteran named Steven Frost, on spy novelist Steinhauer's contemporary Berlin-set TV series for premium cable channel EPIX. Deadline reported the casting. As we learned in May, Berlin Station (which sounds kind of like a Snowden-era variation on Len Deighton's classic Berlin Game) will follow Daniel Meyer, a rookie CIA case officer stationed to Berlin with a secret mission to spy on his own colleagues and root out a mole who leaked information to now-famous whistleblower Thomas Shaw. Guided by the jaded career spook Hector DeJean, Meyer ends up uncovering a conspiracy that leads back to Washington. Steinhauer, one of the best writers currently working in the espionage genre, will write all ten episodes, and executive produce along with showrunner Brad Winters (The Americans, Dig), The Good Shepherd screenwriter Eric Roth, and The Drop director Michaël Roskam, among others. Roskam will direct the first two episodes. Jenkins, who hasn't starred on a television series since Six Feet Under (though he was excellent in the HBO miniseries Olive Kitteridge last year), is an excellent choice for a spy series. I'm already incredibly excited about this series because of Steinhauer; this first piece of casting just strengthens that excitement.

Berlin Station, which starts shooting this fall, is one of two Berlin-set espionage cable dramas in the pipeline for next year. The other one is William Boyd's Spy City, set at the height of the Cold War in the 1960s. Berlin made an excellent spy setting then, and still does now, and both series sound excellent.

Steinhauer's latest novel, All the Old Knives, is currently in development with The Mark Gordon company, with Neil Burger (Limitless) set to direct and Steinhauer scripting.
Posted by Tanner at 9:24 PM