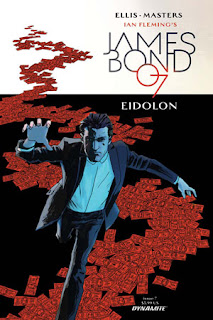 This is a big week for James Bond fans. Tomorrow sees the release of both the collected edition of the first new 007 comic book storyline in more than twenty years, VARGR, and the first issue of Dynamite's second storyline, EIDOLON, both written by comics superstar Warren Ellis (Global Frequency, RED). The gorgeous VARGR hardcover (which includes a gallery of all of the series' beautiful variant covers as well as some stunning concept art by series artist Jason Masters) will look great on the shelf alongside all your other Bond continuation novels. 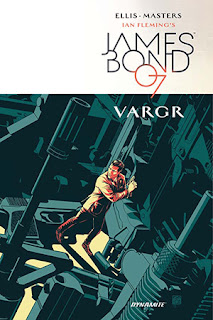 With British author Warren Ellis, Dynamite seemed to land the perfect writer for a new generation of contemporary 007 comics. Ellis achieved great acclaim for his original series like Transmetropolitan and Planetary, as well as his work on mainstream superhero titles like Iron Man and Excaliber. But it was his previous forays into the paranoid world of spies and espionage in series like Global Frequency, RED (which was turned into a 2010 movie starring Bruce Willis which in turn spawned a sequel) and Reload (with former James Bond artist Paul Gulacy) that made Ellis ideally suited for Ian Fleming's superspy.

He recently took a moment for a brief exclusive interview with the Double O Section to answer some deep-cut, hardcore Bond nerd questions, and to discuss his work on "VARGR" and what we can expect from "EIDOLON" (which reintroduces SPECTRE to the world of the literary 007!).


00: You've taken on the Bond myth before in some other guises. How is your Bond different from the Bond/Nick Fury analogue in Planetary, John Stone?

Ellis: Well, that character was much more of a specific riff on Marvel's Nick Fury character from the 1960s -- its only relationship to Bond was in the things that Nick Fury's writers and artists took from Bond. My Bond is the Bond of the books, by design and agreement with the Ian Fleming estate, and there's not, to my eye, a lot of connection there beyond the superficial.

00: Obviously you re-read a lot of Fleming to prepare for this series. Since you're now an official 007 continuation author, working with the Fleming estate, did you delve at all into the work of any previous continuation authors, like Kingsley Amis, John Gardner, Raymond Benson, or William Boyd? Or is it necessary to consciously avoid that?

Ellis: I decided to consciously avoid that. The remit was very much to live within the Bond of the books, and my decision was to only read the Fleming. Going in, I was terrified of pastiche or dilution, and to read the continuation books would put me at a remove from the central texts. The only non-Fleming reading I did was Amis' non-fiction appreciation of Bond [The James Bond Dossier], just to complement my own notes.

I never really thought of myself as an "official" 007 continuation author before. I quite like that. Thank you.

00: You're welcome! It's a great group to be in. There are some elements very much present in Fleming, but which have become exaggerated in the films – notably the gadgets (attaché cases with hidden weapons as opposed to invisible cars) and humor (wry observations rather than puns). How do you walk that line between the book and film takes on those things, and will we see more of either in EIDOLON?

Ellis: There were one or two gags I couldn't resist, just as I couldn't resist opening VARGR with a movie-style cold open. I'm never going to get another opportunity to write one of those, after all. But, in general, I cleave much more towards the more reserved tone of the books. Not perfectly, I know -- I leaven the text when the opportunity presents itself, not least because it opens up Bond's personality. I don't have access to the ease of interiority that prose provides, so I take advantage of dialogue interplay and body language, the affordances of comics.

EIDOLON might be a little "lighter" than VARGR, as I allow myself a few Fleming-isms that I avoided in VARGR. "Dharma Reach" was a fun name in VARGR, for instance, but there's a female character in EIDOLON with a far more full-on Fleming-y name.  As in Fleming, it's the little details that make it live. 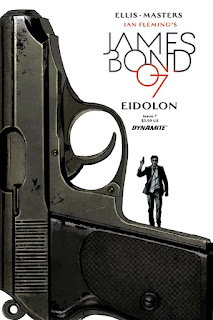 Be sure to pick up the collected edition of VARGR if you haven't already to revel in those little details, and check out James Bond 007 #7, in comic shops June 22, to read Ellis's latest Bond adventure. Thank you to Warren Ellis for taking the time for this interview and to Dynamite Entertainment for making it happen.