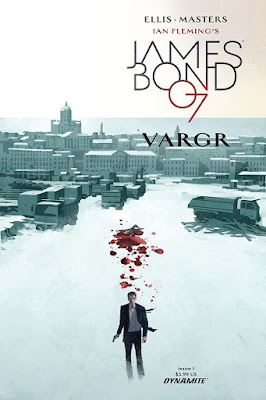 After an excruciating twenty year absence from the medium of comics, I am absolutely thrilled to report that, thanks to Warren Ellis, Jason Masters and Dynamite, James Bond is back! By which I don’t merely mean that, in a factual sense (as any regular reader of this blog surely already knows), there is a new 007 comic book, but that there’s a new 007 comic book that really delivers 007! Ian Fleming's James Bond 007 #1, which kicks off the 6-part “VARGR” storyline, met and even exceeded my high expectations for the character in this medium. I hope the following issues live up to the exacting standard established here! 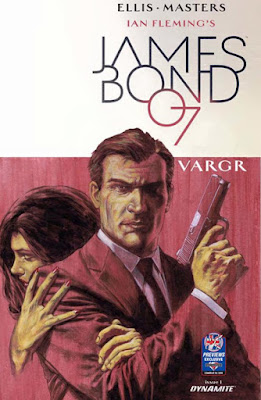 Although this Bond is very much the literary Bond of Ian Fleming (and also quite noticeably of Kinglsey Amis, John Gardner and Raymond Benson, in certain respects), licensed by Ian Fleming Publications, “VARGR” does make some concessions to the film version of the character—as any new take on the secret agent really must. Certain things like a Q scene (though this particular one comes directly from Fleming; Major Boothroyd gives Benson’s Walther P99 the same withering treatment he once gave Bond’s old Beretta, saying, “This is a gun for ladies, 007. And not very nice ladies at that.”) or flirting with Moneypenny (is her line here, “I remember when you were charming!” intended as a dig at Daniel Craig?) were never de rigeur in Fleming’s novels, but thanks to the films it’s impossible to imagine a Bond story without these elements. In a presumed nod to Naomie Harris, the current screen Moneypenny, this comic’s Miss Moneypenny is black. In an interesting first, so is the comic’s M, though skin color is just about the only thing different with him. In most respects, Ellis’ M seems very much like Fleming’s irritable yet fatherly Secret Service supervisor. (His office, however, is startlingly bare. I would have liked to have seen a painting of a ship or two on the wall. It’s also odd that his guest chair looks like it came from IKEA, but maybe that’s intentional so that no one he’s interviewing can ever get very comfortable.) 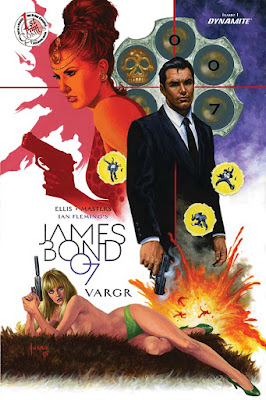 What Ellis gives us is, like other Bond comics before it, a nice blend of the literary and film Bonds, but it also goes beyond that, establishing itself in just one issue as a fairly unique take on 007. While past Bond comics have given us some wonderful variations on the familiar tropes of the character, Ellis manages to deliver quite a few moments of sheer originality. I can’t recall witnessing a job search for a new 00 agent before in any medium (which is not the only element present that brings shades of Greg Rucka’s Queen & Country, the ne plus ultra of spy comics, into Bond’s world), and that subplot begun in this issue looks promising. I also can’t recall Bond ever identifying himself to a doomed enemy in quite such a fashion as he does here. When a scuzzy assassin with a tattoo that may be an homage to Ellis’s Transmetropolitan character Spider Jerusalem finds himself staring up the barrel of James Bond’s gun, he asks, “Who are you?” We might be expecting the familiar response that Mr. White got to that question at the end of Casino Royale, but instead Bond answers, “You killed 008. And I’m 007.” That’s really quite a chilling response! The assassin needn’t know what a Double O prefix means to know he’s in deep trouble when he hears that.

We even get scenes of Bond and Bill Tanner eating in the MI6 canteen. That’s another moment that feels like it could come out of Queen & Country (as is a new Service rule that agents must draw weapons on station rather than travelling armed, much to Bond’s chagrin), but it’s also entirely appropriate to Fleming’s Bond, and serves both to humanize the character and to establish his friendship with Tanner. 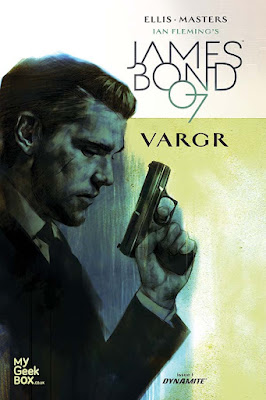 Overall I was a fan of Jason Masters’ artwork, though that’s also the main area in which I have a few criticisms. I found some of the action difficult to follow thanks to confusing breakdowns, particularly in the opening action sequence. Moreover, the only thing this comic book incarnation of 007 is really lacking is a visually iconic James Bond. Both Mike Grell and Paul Gulacy delivered pretty iconic versions of the character in their respective 90s comics. Masters’ Bond is certainly not bad in any way (he sort of reminds me of a leaner Henry Cavill), but he isn’t definitive either. And his slouchy body language when in conference with M didn’t ring quite true for me. Fleming’s Bond was always more respectful in the presence of his boss, and while he sometimes verged on insubordination, he was also generally eager to please. Other than those minor gripes, however, the art is top notch. And even if I didn’t find his Bond iconic, Masters excels at conveying the character’s humor through his facial expressions, which is crucial in making Bond likeable. 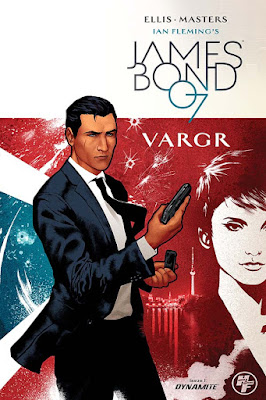 All things considered, I really couldn’t be more pleased with the debut issue of Dynamite’s James Bond 007 series. The final page leaves us with our first glimpse of the villain and a definite desire to see where the storyline takes us next. I have a really good feeling that it’s going to be a great ride. Yes, Bond is definitely back!

Ian Fleming's James Bond 007 #1 is available in comic shops everywhere today, with many different variant covers.
Posted by Tanner at 4:20 AM