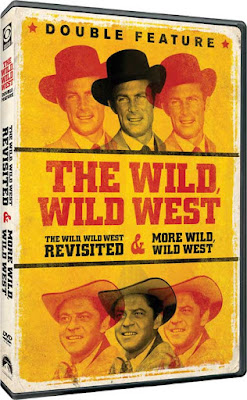 Back in 2008, CBS/Paramount put out The Wild Wild West: The Complete TV Series, which included all four seasons of the classic Sixties spy Western starring Robert Conrad and Ross Martin, along with a bonus disc including the two TV reunion movies from 1979 and 1980, respectively—The Wild Wild West Revisited and More Wild Wild West. Rather than a nice bonus feature, though, this proved a bone of contention with many fans who had bought each season as it was released individually and, understandably, did not wish to shell out for a large, annoyingly-shaped box set just to get one extra disc. At the time, it was hoped the two movies would be released on their own, but that never happened. Even worse, when the studio repackaged The Complete TV Series in a streamlined, more shelf-friendly version... the reunion movies were not included. I was therefore quite pleasantly surprised to read on TV Shows On DVD that nine years after their inclusion in the original Complete Series set, CBS/Paramount will finally be releasing a standalone double feature DVD of these two reunion films this summer! And fans who have clung to their individual season releases for all these years can finally complete their collections. The disc will be out on June 13 and will retail for $14.99. It can already be pre-ordered on Amazon. Wow, it gives me such a sense of nostalgia to write a DVD announcement for a Wild Wild West title! I duly reported on the original season releases as they were announced back in the early days of this blog—and the heyday of DVDs—and reviewed them as they came out.
Thanks to Jack for the heads-up!

Read my review of The Wild Wild West - The Second Season

Both follow-ups were recently shown on Decades with commercials. I was one of the guys that bought each season separately at full price. Paul Williams and Johnathan Winters (a wonderful, hilarious actor) were all wrong as bad guys. They might as well have cast Soupy Sales. I'd have brought back Count Manzeppi with Victor Buono who had a thankless part in More WW. It was still fun to see Conrad and Martin back in their signature roles even though the films veered into slapstick and dragged at times, something the original show never did.