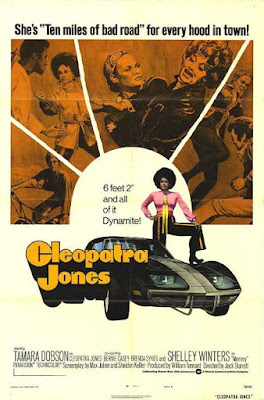 Blaxploitation heroines Cleopatra Jones and Christie Love are both making comebacks... with an espionage twist. Deadline reports that ABC is resurrecting the 1974 TV movie and subsequent series Get Christie Love!, but dropping the exclamation mark and adding spying. Christie Love, as played by Teresa Graves, was a police detective. But in the new version starring Kylie Bunbury (Pitch, Under the Dome), is, according to the trade, "an African American, female CIA agent who leads a highly trained elite ops unit. Beautiful and charismatic, Christie transforms into whoever she needs to be in order to get the job done especially when it’s down to the wire and the stakes are life and death." The new "action-packed, music-driven" hour-long drama hails from Power creator/showrunner Courtney Kemp and producers Vin Diesel, Debra Martin Chase and Shana C. Waterman.

This news comes on the heels of an earlier Deadline story reporting that sexy, karate-chopping government agent Cleopatra Jones (one of Christie Love's inspirations) is also making a comeback--on the big screen. Jones travels the world smashing drug rings under the cover of being an international model with a gloriously flamboyant wardrobe that would make Fatima Blush jealous. According to the trade, "the studio has set Misha Green (Underground, Lovecraft) to write the script and produce a film that will present the heroine very much as the female answer to James Bond." Deadline points out that "those comparisons were made when the original hit film was released, partly because Jones was so adept at martial arts and drove a Corvette Stingray fully equipped with automatic weapons." Tamara Dobson (Amazons) starred in the 1973 original (opposite Never Say Never Again's Bernie Casey) and its less successful 1975 sequel Cleopatra Jones and the Casino of Gold. The Cleopatra Jones movies stood out from many of their grimmer blaxploitation brethren thanks to their sharp comedy. No one has yet been cast to fill Dobson's shoes.
Posted by Tanner at 11:24 PM