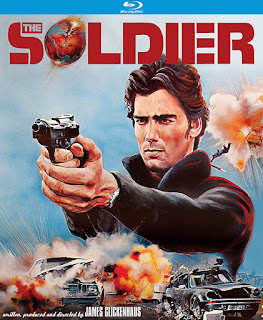 Two cult Eighties spy flicks never officially available on Region 1 DVD are, in both cases rather surprisingly, making their way to Blu-ray early next year.

1982's The Soldier (tagline: "You don't assign him. You unleash him.") was among the first of the blisteringly gung-ho 1980s Cold War spy movies that made a resurgence with Reagan's presidency after all the paranoid, anti-CIA films of the scandal-ridden Seventies. Ken Wahl (Wiseguy) stars as the titularly code-named CIA super-agent tasked with thwarting KGB-backed terrorists threatening to unleash chaos in the middle-east by detonating a nuclear bomb in a Saudi oil field. The ultra-Eighties action jumps from West Berlin to Washington to Saudi Arabia as The Soldier teams up with the Mossad. The cast also includes Alberta Watson (La Femme Nikita, 24), Joaquim de Almeida (Clear and Present Danger), Jeffrey Jones (The Hunt for Red October), and Klaus Kinski(!) (Our Man in Marrakesh) as a KGB assassin. While it's never had a North American DVD release, Kino Lorber will release a Blu-ray on February 27, 2018, generously including trailers and an audio commentary by film historian Jim Hemphill... along with awesome cover art! Retail is $29.95, but that will likely go down on Amazon nearer the release date. 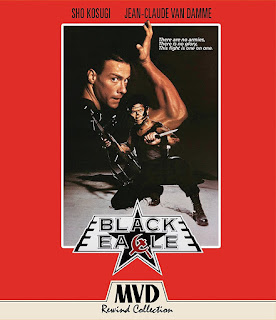 Maybe it should be classified as a guilty pleasure, but I really enjoy the early Jean-Claude Van Damme flick Black Eagle (1988). Coming on the heels of Bloodsport by only a month, Black Eagle hit theaters just on the cusp of JCVD's stardom. Van Damme (Maximum Risk, Jean-Claude Van Johnson) isn't the hero, but the antagonist, a brutal KGB agent. Japanese martial arts star Sho Kosugi (Ninja Assassin) plays the hero, a CIA agent deployed (against his will) to recover a laser weapon from an F-111 downed in the Mediterranean. Good fights and excellent Maltese scenery (as well as some underwater action) make the movie worth watching. For a movie that's never even had a regular DVD release in North America (that I'm aware of), Black Eagle is surprisingly getting the full 2-disc Special Edition treatment from the MVD Rewind Collection! The Blu-ray/DVD combo will, happily, include both the 93-minute theatrical version and the superior 104-minute uncut, extended version of the film. It also boasts a slew of special features, including deleted scenes, the original theatrical trailer (which was awesome), the featurettes "Sho Kosugi: Martial Arts Legend" (HD, 21:26) (featuring new 2017 interviews with Sho Kosugi and Shane Kosugi and more), "The Making of Black Eagle" (HD, 35:50) (featuring new 2017 interviews with Director/Producer Eric Karson, Screenwriter Michael Gonzalez and stars Sho Kosugi, Doran Clark, Shane Kosugi and Dorota Puzio), "Tales of Jean-Claude Van Damme" (HD, 19:20) (Brand new 2017 interviews with cast and crew tell stories about working with the legendary action star), and "The Script and the Screenwriters (HD, 27:14) (new 2017 interviews featuring Michael Gonzales, Eric Karson and more)... as well as a "collectible poster." Whew!

To recap, someone made a 35-minute documentary about the making of Black Eagle. Did you ever expect to see that? I didn't, but I can't wait to watch it! Retail is a steep $39.95, but hopefully that price will drop on Amazon as we near its February 13 release date.

If you're interested in movies I blog about, please consider ordering or pre-ordering from the Amazon links included in the articles to support the Double O Section. Thank you!
Posted by Tanner at 1:39 PM