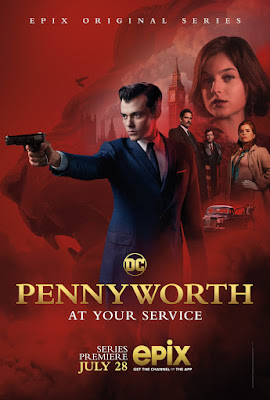 Following the brief teaser revealed in March, EPIX has released a full trailer for that Sixties spy show about Batman's butler, Alfred Pennyworth... long before he was Batman's butler. Hey, whatever it takes to get a Sixties-set spy show on the air today! (And clearly what it takes is some sort of popular superhero property branding.) While Pennyworth is not directly connected to any other specific incarnation of the Dark Knight (including Gotham, which hailed from the same creative team), it certainly seems as if the appealing star, Jack Bannon (Endeavor), is doing his best to channel a young Michael Caine. (Caine played Alfred in the Christopher Nolan Batman trilogy, and of course embodied the quintessential 1960s London spy, Harry Palmer.) Set in an alternate reality Sixties London, Pennyworth follows young Alfred's adventures as a budding private security contractor fresh out of the SAS working with Thomas Wayne (future father of Bruce) to stop a threat against Her Majesty's Government.