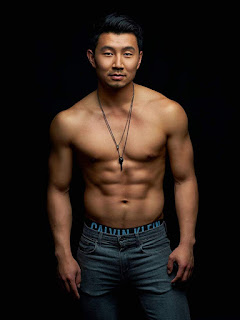 As much as I love Nick Fury, Agent of S.H.I.E.L.D. (and I love it dearly!) and Black Widow, my favorite Marvel spy comic has to be the original 1970s run of The Hands of Shang-Chi, Master of Kung Fu... particularly the issues showcasing the brilliant collaboration of writer Doug Moench and artist Paul Gulacy (a team who would go on to produce the best James Bond comic book to date, "Serpent's Tooth"). Last December, it was first reported that a Shang-Chi movie would feature among Marvel Studios' next slate of films. All has been quiet since then... until this past weekend. On a massive panel at Comic-Con Saturday night, Deadline reports, Marvel Studios chief Kevin Feige announced the first official details about the studio's upcoming Master of Kung Fu movie, including its title and who will play the titular master, Shang-Chi. 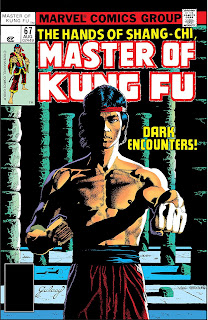 Feige told the assembled hordes of fans in SDCC's Hall H that Shang-Chi and the Legend of the Ten Rings will open on February 12, 2021. Chinese-Canadian actor Simu Liu will play Shang-Chi. Best known for a Canadian sitcom called Kim's Convenience, Liu has earned spy cred with roles on Nikita and the Taken TV show. As studied Marvel fanatics will glean from the title, Iron Man comics villain the Mandarin (basically a Marvel rip-off of Sax Rohmer's 1920s-created "yellow peril" character Fu Manchu) will replace the actual Fu Manchu (a character Marvel licensed in the Seventies, but no longer has the rights to) as Shang-Chi's criminal mastermind father... and the great Tony Leung (Lust, Caution, The Silent War) will play him. Actress and rapper Awkwafina (Crazy Rich Asians, Ocean's 8) will also appear in the film, though her role was not announced. I can't really imagine her as Shang-Chi's love interest Leiko Wu, but she might make a good foil as his duplicitous half-sister Fah Lo Suee. (Or she could be playing an original comedic role, of course.) As previously announced, Destin Daniel Cretton (Short Term 12) will direct, and Dave Callaham (Jean-Claude Van Johnson) handles scripting duties, making up an all Asian-American creative team driving the picture.

The comic book The Hands of Shang-Chi, Master of Kung Fu was created in the early Seventies to (obviously) cash in on the kung fu craze of the time. Comics legends Steve Englehart (Batman: Strange Apparitions) and Jim Starlin (Avengers: Infinity War) originated the character, but it was the dynamic writer/artist team of Moench and Gulacy who became most associated with Shang-Chi... and who gave the comic a new direction as an espionage series. 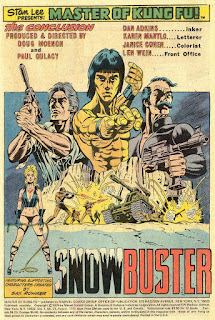 Shang-Chi's real world origins at Marvel are a bit complicated, as the publisher had acquired the rights to Rohmer's villainous Fu Manchu character (still well-known at the time thanks to a series of Christopher Lee movies in the Sixties), but Englehart was more interested in the popular TV series of the time, Kung Fu. So he incorporated Rohmer's characters Fu Manchu and his nemesis, British adventurer Sir Denis Nayland-Smith, but invented a new character to star in the series more inspired by Kung Fu... Fu Manchu's hitherto unknown son, Shang-Chi. Though the father had seen to it that the son was trained from birth to be a Master of Kung Fu, when Shang-Chi discovered that the father he believed to be munificent was actually a diabolical criminal mastermind, he turned on him, and found employment with Nayland-Smith and the British Secret Service. In the hands of Moench and Gulacy, secret agent Shang-Chi encountered all manner of spy hijinks, from moles inside MI6 to supervillains with private islands, gadgets galore, and robotic armies. He also developed a roster of memorable sidekicks, including Nayland-Smith's assistant and bodyguard Black Jack Tarr (drawn by Gulacy to resemble Sean Connery in The Man Who Would Be King), and fellow MI6 agent Clive Reston (drawn by Gulacy at first to resemble Connery in Goldfinger, but later looking more and more like Roger Moore), who is strongly hinted to be the son of James Bond and the grand-nephew of Sherlock Holmes. Should the character of Black Jack Tarr make the movie roster (and it's hard to imagine Master of Kung Fu without him), I'd love to see Jason Statham brought into the Marvel Cinematic Universe in that role! Sure, he's too short... but I think he'd nail the attitude--and make a formidable physical foil for Liu.

While Marvel's most famous spy agency, S.H.I.E.L.D., never showed up in the pages of Master of Kung Fu (though Shang-Chi did eventually team up with Nick Fury and Black Widow in a multi-issue arc of Marvel Team-Up), Gulacy's stunning artwork owed a clear debt to Nick Fury, Agent of S.H.I.E.L.D. artist Jim Steranko. Like Steranko, Gulacy reveled in quasi-sci-fi technology and weaponry and innovative, experimental page layouts. (One particular standout turned the page into a maze, following Shang-Chi's progress against a variety of opponents as he navigated the labyrinth.) He also brought his own obsessions to the table, like Bond-inspired, movie poster-style splash pages, relentlessly sexy women in proto-Gaultier leather fashions, and the liberal use of famous actors' likenesses to "cast" the book with everyone from Bruce Lee (upon whom Gulacy's Shang-Chi was clearly based) to Marlon Brando, Christopher Lee (as Fu Manchu, of course), David Niven, and even Groucho Marx. The result was a truly unique book that far transcended (and consequently outlasted) the kung fu movie trend from which it was born, and drew influence from all sorts of popular culture. I think it may well be my very favorite Marvel comic. Long unavailable outside of back issue bins, the entire 125-issue series has at long last been reprinted over the past few years in four massive, hardcover omnibus volumes, which I cannot recommend highly enough. Marvel has also recently begun a line of cheaper paperback "Epic Collections."
Posted by Tanner at 5:26 PM