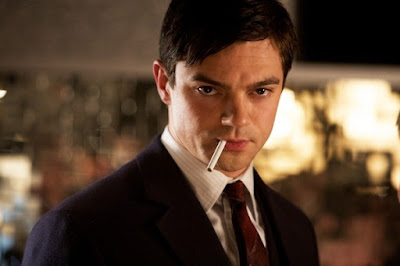 Several years ago, around the same time that Olen Steinhauer's Berlin Station was announced, another Berlin-set spy series from another major novelist was also announced: William Boyd's Cold War-set Spy City. But it sadly never came to be at that time. Now, five years later, though, it's finally happening!

Originally set up as a 10-part series at Gaumont, Deadline reports that Boyd's vision will finally come to life as a 6-part series for Miramax and Germany's H&V Entertainment and ZDF. And it will star a face who's become quite familiar to spy fans--Dominic Cooper. Cooper starred as Tony Stark's father, Howard Stark, in Captain America: The First Avenger, and again on the excellent late 1940s-set spy TV series Agent Carter. He also played Ian Fleming in the BBC miniseries Fleming. He'll continue his run of period spy shows in Spy City by playing a British agent dispatched to Berlin in 1961 to root out a traitor in the UK Embassy or among the Allies, shortly before the construction of the Berlin Wall. "The city, declared by Soviet leader Nikita Khrushchev as 'the most dangerous place on earth,' is teeming with spies and double agents. One wrong move could trigger the looming threat of nuclear war as American, British and French troops in West Berlin remain separated from their Soviet and East German counterparts by nothing more than an imaginary line."

William Boyd is the author of the James Bond continuations novel Solo, as well as the excellent generational spy saga Restless  (which the author adapted into a miniseries with Agent Carter's Hayley Atwell) and what might very well be my favorite novel so far this century, Any Human Heart. That one's not a spy novel, though it does feature some spying, and Ian Fleming as a minor character. It was also turned into a miniseries with Atwell, as well as Spooks' Matthew Macfadyan and Casino Royale's Tobias Menzies as Fleming. There are a lot of odd connections forming here! An intelligence analyst might even discern some sort of pattern. Can an announcement of Ms. Atwell co-starring in Spy City be far off? So far, Johanna Wokalek (The Baader Meinhof Complex) and Leonie Benesch (The Crown, Babylon Berlin) have been announced besides Cooper. Portuguese filmmaker Miguel Alexandre will direct.

When the project was first announced in its original, slightly longer format, Variety reported that Spy City "sheds light on the personal lives of spies and focuses on a group of men and women of different nationalities and backgrounds who are in the 'hornet’s nest' of divided Berlin." The Hollywood Reporter added, "Spy City is set in the hottest period of the cold war, when Berlin was the center of the global chess game between the powers of East and West. The series is billed as an intimate look at the men and women who risked everything to become spies."

In addition to being an internationally acclaimed novelist, Boyd is also a successful screenwriter. He co-wrote Richard Attenborough's Oscar-nominated biopic Chaplin (1992), adapted other people's novels into Mister Johnson (1990, starring Pierce Brosnan) and Sword of Honor (2001, starring Daniel Craig), and adapted his own novels A Good Man in Africa (1994, starring Sean Connery and Diana Rigg) and Stars and Bars (1988, not starring any James Bond, but starring Daniel Day-Lewis, which is also pretty good), among many other credits. He wrote and directed The Trench (1999), which also starred Craig. Besides Solo, his recent novels include the WWI espionage tale Waiting for Sunrise, the pharmaceutical thriller Ordinary Thunderstorms, and the short story "The Vanishing Game." The latter, Boyd's homage to John Buchan's The 39 Steps, is a great read and a great introduction to the author, as it's available for free (thanks to Land Rover) as an e-book from Amazon and as an audiobook download from Audible. It's a lot of fun, and I highly recommend it. Most of all, though, I can't wait for Spy City! I'm glad it's come back to life.
Thanks to Jack for the heads-up on this!
Posted by Tanner at 9:26 AM