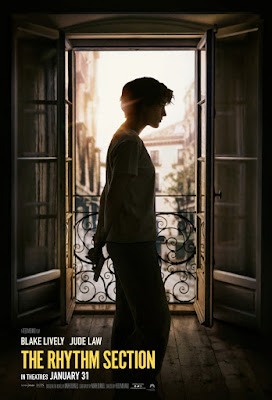 On Friday Paramount dropped the trailer for the second most anticipated EON Production of 2020, The Rhythm Section! The Rhythm Section has been delayed several times (first when star Blake Lively suffered an on-set injury), but here's proof that it's finally really coming... and it looks great! While an adaptation of Mark Burnell's 1999 spy novel would be something for spy fans to be seriously excited about anyway, it's even more exciting because it hails from Barbara Broccoli and Michael G. Wilson's EON Productions, the producers behind the James Bond movies. While EON has been venturing outside the realm of 007 lately, this marks their first new foray into the genre that defined them—and that they defined, under the auspices of first-generation Bond producers Albert R. Broccoli and Harry Saltzman. And it's not only a new EON spy movie; it's potentially the start of a new, female-fronted EON spy series! (Burnell wrote four Stephanie Patrick thrillers.) Will Lively end up being the Sean Connery of a long lasting Stephanie Patrick film series?

The books are quite good, and remind me of a female Callan. Like Callan, Stephanie ends up working as an assassin for a particularly unpleasant boss in an ultra-secret branch of British Intelligence. And like Callan, she doesn't do this work by choice. Instead she's forced into it by that unpleasant boss. But she's also got very personal motivations (motivations he ruthlessly manipulates) for her initial mission: an opportunity to get revenge on the terrorists responsible for the death of her parents and siblings. Burnell's book is very dark and very serious, and judging from this trailer the movie will be true to that tone. In fact, the movie (directed by Reed Morano and scripted by Burnell himself) looks quite faithful to the book overall, though it's obvious that the ending has been changed, which was pretty much a given. (The villains' plot in the '99 book had eerie similarities to 9/11, which simply wouldn't play in today's world.) And it looks great!

This one looks good. Lively has a great screen presence from what I've seen her in ("A Simple Favour" and that shark movie..."Shallow Water"? I'm resisting the urge to Google it. "The Shallows"? ...I give up. You know the one I mean.

As there's increasing internet debate about casting a female Jane Bond, etc, etc, I'd much rather see an original series of espionage films with a female lead. Whatever happened to the "Queen & Country" movie with Ellen Page as Tara Chace, by the way? Went into turnaround? Got shelved? That would have been a good one.
Otherwise, we can hope for an "Atomic Blonde" sequel (or five). There was that obscure attempt at a female Bond back in the '70s called "S.H.E - Security Hazards Expert", starring...it'll come to me...Hah, Cornelia Sharpe! SHe ended up making a film with Connery during his lean years. It was called "The Next Man" and I think he played a Middle Easter Diplomat if I recall my teenage movie magazines correctly.