THE PRESIDENT'S ANALYST is Coming to Blu-ray! 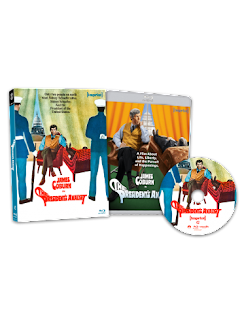 A few weeks ago, Paramount announced a remake of The President's Analyst was in the works. Now comes even better news.... The 1967 original, starring James Coburn, Godfrey Cambridge, and Severn Darden, is at long last coming to Blu-ray! Australian label Via Vision will release the title via its Imprint imprint (yes, you read that right: two "via's" and two "imprint's") on May 26. It' can be imported from the Via Vision site, and is available to pre-order from American outlets like Amazon (from which this site receives a kickback) and DeepDiscount. Imprint Blu-rays are region-free. The 1080p HD presentation of the film with LPCM 2.0 mono audio comes with brand new special features including an audio commentary by the great Tim Lucas (who recently provided the company with an updated audio commentary for their release of Danger: Diabolik to supplement his classic original DVD commentary with John Philip Law) and an appreciation of the film from Kim Newman, as well as the original theatrical trailer and optional English subtitles. The first 1500 copies will come in a limited edition slipcase. The President's Analyst is one of the all-time great spy comedies, and remains as timely as ever. If you love it as much as I do, you'll already have pre-ordered. If you've never seen it... now's your chance!
Posted by Tanner at 11:54 PM

THE PRESIDENT'S ANALYST is a terrific movie. Amazingly the political satire in the film still works, after 54 years. And as a spy spoof it's simply wonderful.

I hope the remake never gets made - there's no way you can ever recapture the magic of a successful 1960s movie today.