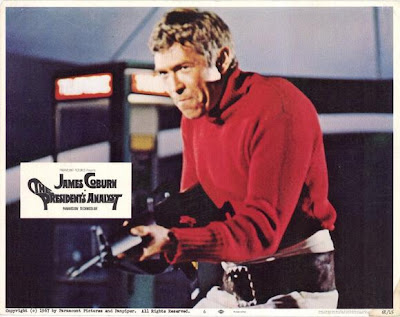 Theodore J. Flicker's 1967 James Coburn satire The President's Analyst is one of my very favorite spy movies. (It's also Coburn's best spy movie... Sorry, Derek Flint.) When describing it to people, I always say that the comedy holds up surprisingly well today... sadly. America is still facing many of the same social  issues Flicker sent up over fifty years ago (from institutional racism to monolithic Big Tech), and it's easy to imagine a remake. Now, Paramount is imagining one... with The Daily Show host Trevor Noah on board to produce and potentially star. According to The Hollywood Reporter, former Obama White House staffer Pat Cunnane will write the script. The premise, about a psychotherapist burdened with all of the President's top secret stresses, will obviously be familiar ground for him! According to his publisher, Cunnane served as "President Barack Obama’s senior writer and deputy director of messaging at the White House, where he worked for six years in many roles."
Per the trade, "Details for the new take are being kept under the couch but it is described as a re-examining the 1967 satire through the lens of the contemporary political landscape." You really wouldn't have to change too much. I do hope the new film retains the original's almost Pink Panther-esque slapstick tone though. It's not too often you see slapstick and satire married together, but Flicker's film did it perfectly. Severn Darden and Godfrey Cambridge co-starred in the original.
Posted by Tanner at 12:09 PM

Awesome! A woke remake of TPA. Just what the world needs.