Tradecraft: Damian Lewis and Dominic West to Star in A SPY AMONG FRIENDS Miniseries 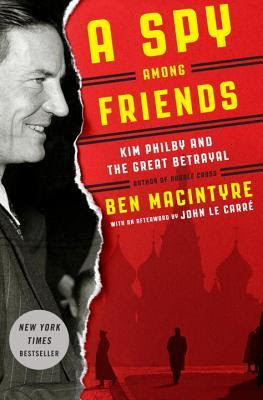 It's a real spies' reunion for the miniseries version of Ben MacIntyre's superb non-fiction book A Spy Among Friends! Nearly everyone involved has some serious spy experience on their resume--and many of them have worked together before. It's no wonder the book has attracted such an array of veteran talent; for my money it's a strong contender of the best spy biography ever. MacIntyre uses the close friendship between the notorious double agent Kim Philby and loyal MI6 officer Nicholas Elliott to frame the story of the notorious Cambridge spy ring that shook the foundations of British Intelligence--and the Cold War at large.
According to Deadline, Damian Lewis (Our Kind of Traitor) will reunite with his Homeland producer Alexander Cary (the Taken TV show) to star as Elliott. Dominic West (The Hour, Johnny English Reborn) will play Philby, who has been portrayed in the past by Toby Stephens, Tom Hollander, Anthony Bate, and Billy Cruddup. Both Lewis and West were readers in the series of celebrity-read James Bond audiobooks.
Cary will write the six-episode miniseries, and Nick Murphy, who directed the recent dark BBC/FX version of A Christmas Carol, will direct. Both will produce, as will Lewis, whose production shingle Rookery was also behind the recent docu-series Spy Wars, which the actor hosted. The series will be a co-production of Sony and ITV Studios for Spectrum Originals and UK streamer BritBox. It's tentatively scheduled to air in fall of 2021, but of course like all things now that's dependent on the novel Coronavirus. Lewis has an obligation to finish his commitment to his Showtime series Billions first once production resumes.
MacIntyre's book has already been adapted as a two-part 2014 BBC documentary, Kim Philby: His Most Intimate Betrayal, which was presented by MacIntyre and starred David Oakes (You) as Philby and William Beck (Casualty) as Elliott in re-enactments. Previously, Lionsgate had optioned the TV rights to the book back in 2014 with writer Bill Broyles (Under Cover, Entrapment) attached, but nothing ever came of that.
Posted by Tanner at 4:15 AM 2 comments: