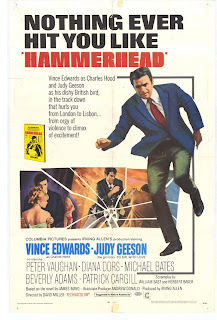 Hammerhead is a very Sixties spy movie. It just oozes its era. It’s hip; it’s happening; it’s with it… or at least it desperately wants to be. It oozes what its filmmakers thought was its era, a zeitgeist captured on film that probably only ever existed in films. But that version of the Sixties is also my version of the Sixties, perfectly in keeping with every other cinematic depiction of the era made by directors who weren’t themselves part of the youth movement. (David Miller was pushing sixty when he made Hammerhead.) There are youths in this movie, and boy do they move. The Sixties are in full Swing everywhere that secret agent Charles Hood goes. From the impossibly of-its-time piece of hippy street theater that opens the film (it includes mannequin dismemberment and topless cellists) to the perpetual, never-ending beach party that concludes it, youths are moving everywhere, gyrating to wild, psychedelic music. There are several happenings, a couple of nightclub acts and even one of those doors that someone could open up in the Sixties behind which beautiful women seem to always be go-go dancing to far-out music. (See also: Killer Likes Candy.) It’s great. I want one of those doors in my apartment! The beautiful woman go-go dancing behind this particular door is Beverly Adams, looking at her absolute best in a tiny micro-skirt. And that door is located on a yacht. Could it get any better? Perhaps I better backtrack and set the scene. 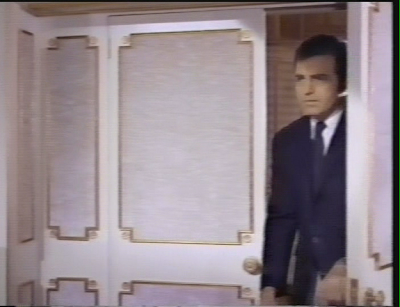 Charles Hood (Vince Edwards) is assigned by his bosses to locate a nefarious individual named Hammerhead (with a name like that, of course he’s nefarious!) and stop him from doing whatever bad thing it is that he plans to do. Details are rather fuzzy on that, but Hood’s cover is a good one: he’s to infiltrate Hammerhead’s organization by posing as a dealer selling him rare pornography! Sure enough, the ruse works, and Hood is invited onto Hammerhead’s private yacht, which is anchored off the coast of Portugal. 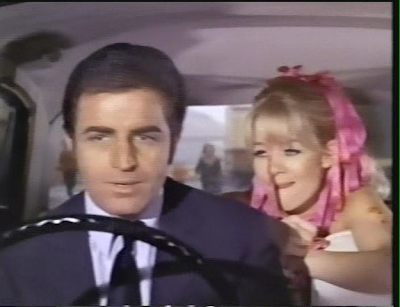 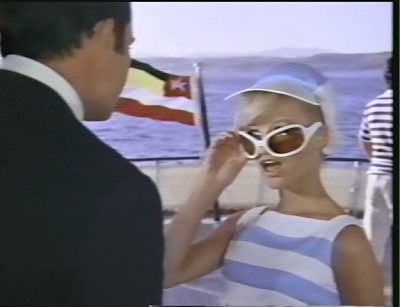 ) who took a liking to Hood after hiding out, nearly naked, in his car to escape a hippy happening in London that was being busted up by the cops, follows him on the train to Lisbon and insinuates herself into the same situation he’s in to be closer to him. Going to such elaborate lengths, surely she must be an enemy agent with her own agenda, right? Perhaps, but then again perhaps she is just a free spirit who does that sort of thing on a whim. This is the kind of movie such a character could easily inhabit. 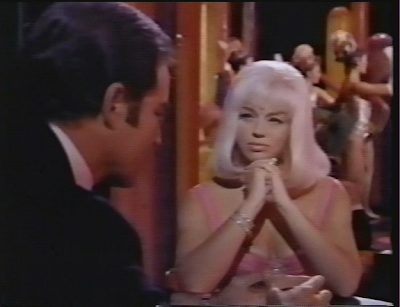 Besides collecting pornography, killing people and dabbling in political assassinations and stolen secrets (his endgame involves both), Hammerhead also has interests in a local go-go club. That’s where Sue gets a job, of course, and before she knows it she’s caught his lecherous eye and been whisked off to his yacht, where Hood is already established undercover. Since one beautiful lady is at least one too few for a Sixties spy hero, he’s also gotten himself entangled with Hammerhead’s mistress—or, more appropriately, kept woman—Ivory (Adams). She of the wild behind-doors go-go dancing. Diana Dors rounds out the requisite trio of beauties as the world-weary proprietress of the local go-go club where Geeson dances. 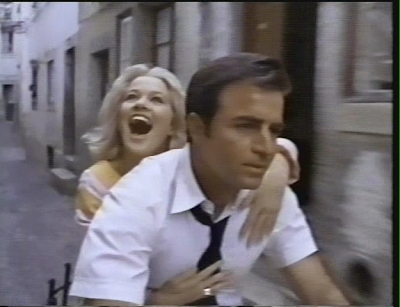 The plot moves along very quickly—so quickly that it doesn’t really matter if it doesn’t all quite make sense. Most of it does, anyway, and there are more than enough happenings to distract from any parts that don’t. The action is good, if not non-stop.  There's a cool motorcycle chase during which the camera gleefully zooms in on Sue's bouncing, miniskirt-clad posterior as she clings to the back of a motorcycle being driven down some stairs by Hood. Hood himself gets beat up a lot, and the fights are surprsingly violent considering the film's carefree tone. Hood spends a fairly substantial chunk of the movie stuck in a coffin, but at least he’s got Judy Geeson to keep him company. The two of them have been packed in for a burial at sea, yet manage to maintain a proactive role in an exciting and extended chase sequence even from within the box. Others caught up in the antics include Kenneth Cope (Randall & Hopkirk, Deceased

) as a misguided motorcyclist and a local taxi driver who proudly announces that his taxi is brand new. Naturally, he ends up sitting atop his brand new taxi on a sandbar as the tide comes in all around it. 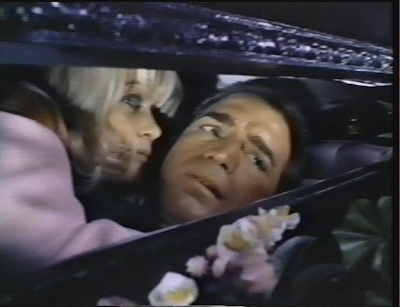 Besides the brisk pace and super-Sixties milieu, the actors also elevate Hammerhead above many of its Eurospy ilk. Vince Edwards makes one of my very favorite Eurospy heroes. He’s not overly self-assured and generally jerky like most of his brethren. Instead, he’s a refreshingly laid back, low-key secret agent. His performance actually reminded me of Mark Ruffalo, an actor I like quite a lot but wouldn’t immediately picture as a spy. TV veteran Edwards has the same easygoing, self-effacing, slouchy charm of James Garner or Peter Falk, but also the good looks to be a convincing ladies’ man. I wish he'd made more spy movies. Geeson manages to make a character who could have been supremely annoying—dare I say it—delightful, and Peter Vaughn turns in his usually reliable performance as the ultra-sleazy villain. There's also a terrific theme song performed by Madeline Bell and what might well be the best speargun death in any spy movie ever. 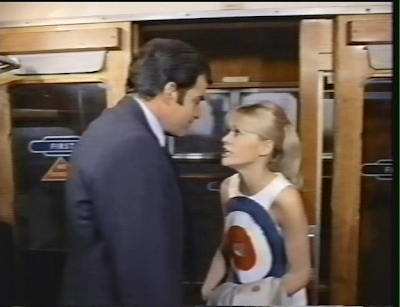 Said speargun incident comes at the end of the film and involves a bikini-clad girl and a helicopter; revealing more constitutes a spoiler, but the scene is too good not to discuss.  I will say that it's kind of hard to actually spoil a movie as formula-bound as Hammerhead, but I feel obligated to provide a warning nonetheless.  Proceed at your own peril. 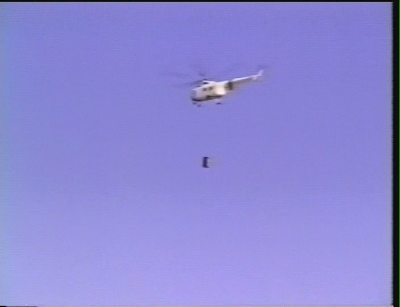 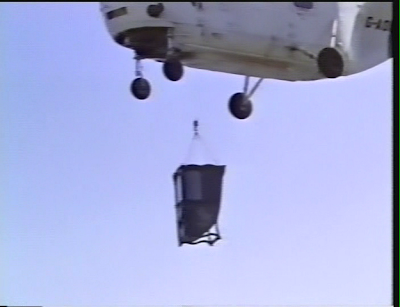 Hammerhead makes his escape from Hood and the assembled might of British Intelligence by climbing into a luxury box dangling from a helicopter.  By "luxury box" I mean a box that's been prepared for this exact purpose furnished with all the luxurious upholstery and curtains that a man like Hammerhead would be used to.  SIS is apparently unable to do anything to stop this slow, comfortable escape, but not the vengeful Ivory.  In a kind of insane variation on Domino's killing of Largo in Thunderball, she emerges from her cabin on the yacht in a minidress, aims a handy speargun at the dangling box knowing that it contains her sugardaddy and fires!  The spear perforates the box, killing Hammerhead and sticking out the other side.  Then a hippy who happens to be dancing in a hanging cage at a never-ending beach party in the general vicinity of all this craziness punctuates the bizarre spectacle by commenting, "Dig that crazy valentine!" Her work done, Ivory proceeds to shimmy across a flotilla of friendly boats to join the dance party, and the hippy seems unconcerned that the tide appears to be coming in around his cage. How can you not love a movie that ends like that? 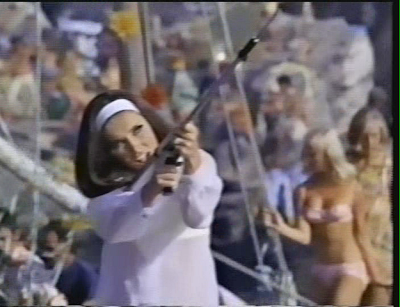 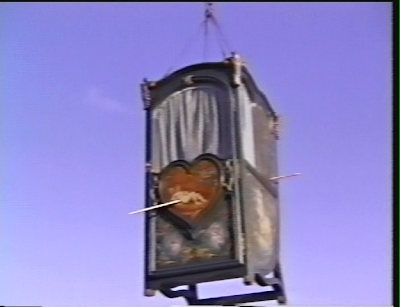 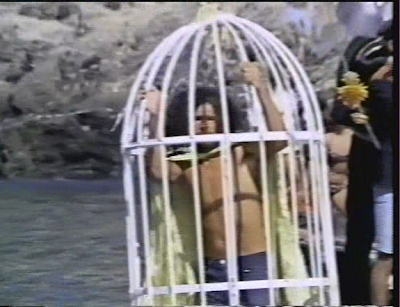 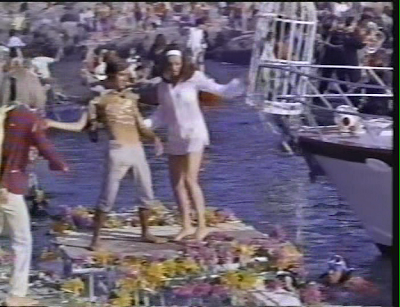 Hammerhead not only a wonderful gateway into a fabulous version of the Sixties that may only ever have existed in such films, but also top-shelf Eurospy entertainment, emblematic of its era, that simply cries out for a proper DVD release.  Sadly, it's currently unavailable in any region. [UPDATE: In late 2011, Sony released Hammerhead on MOD DVD in a beautiful print much better looking than the one represented here. Get it!] Also sad is the fact that it didn't generate any sequels, as there was a whole series of Charles Hood novels by James Mayo

and I would have loved to see Edwards spy again.  C'est dommage.

Now I'll leave you with some more images of youth culture gone mad! 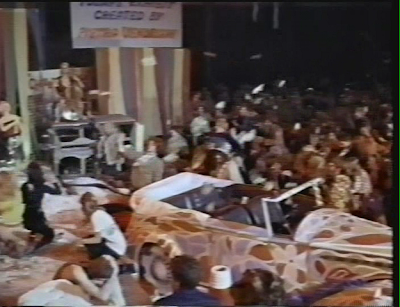 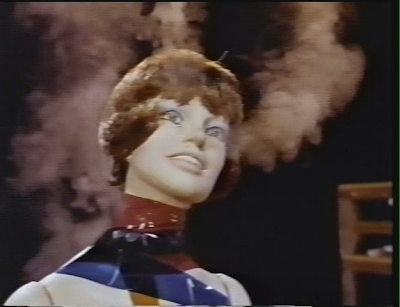 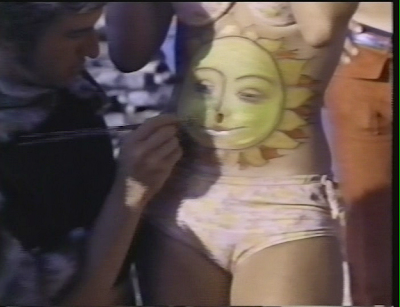 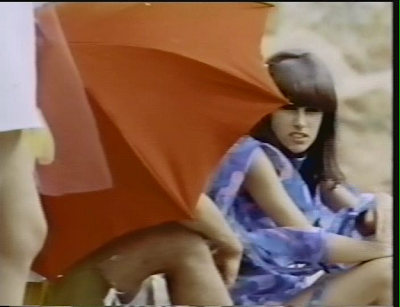 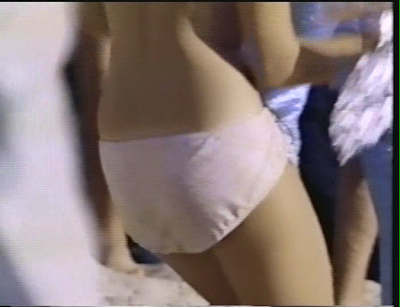 Great post. I must see this! - Jason (spy vibe)

Having read the books I've been curious about the film version.

You had so many freeze frames from the movie - if only you had a freeze frame of Judy Geeson's skirt getting blown up by the helicopter near the end!