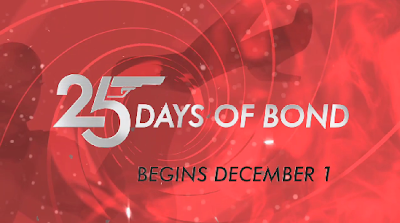 I always used to love the "007 Days of Christmas" James Bond marathons on TBS. Back then, in the Nineties, Bond airings were still special. The movies didn't play all the time the way they do now (it seems like MGM pimps the Bond package out to every cable network from AMC to Bravo), and there was something about a holiday marathon that compelled me to tune in and watch panned and scanned, edited versions (Mrs. Bell's profanity in Live and Let Die was silenced, and occasional nipples flashed in Maurice Binder's title sequences blurred out) of my favorite movies even though I owned them all on VHS. Plus, TBS's promotions were always cool. The ads for the marathon itself that ran at every commercial break were worth watching for alone. So perhaps it's that nostalgia that makes the December Bond marathon "25 Days of Bond" on cable channel EPIX stand apart for me from all the other airings these movies get every month. That, and the fact that some of these films (like On Her Majesty's Secret Service and The Spy Who Loved Me) can be seen in high-def on EPIX HD even though Blu-rays for them have yet to materialize.

I'm afraid I'm a few days late in reporting this. The Advent celebration of the most extraordinary gentleman spy in all fiction kicked off on December 1 with the Barry Nelson Casino Royale (which I imagine pissed off a few viewers expecting to tune into Daniel Craig), and continues with a movie a night through Christmas Eve. Then, on Christmas Day, the network will show Bond movies all day long, with 007's only Christmas adventure, On Her Majesty's Secret Service, airing smack in the middle of the day at 1:15. Isn't that the best? It's so refreshing to quietly duck away from holiday crowds and festive family gatherings to absorb even just a few random minutes of James Bond on Christmas! I should note, however, that the 25 Days of Bond don't quite add up the way you might expect. All 22 official EON productions to date plus the two earlier Casino Royales and Never Say Never Again would indeed make for 25 glorious nights, but the '67 Casino doesn't seem to be part of the equation and EPIX doesn't have the rights to the newest films (from Die Another Day on), so they make up for that by showing Goldfinger and, weirdly, The World is Not Enough twice each and slotting in Maryam D'Abo's interesting documentary Bond Girls Are Forever on the 23rd. Still, that's what I call solid holiday programming!
Posted by Tanner at 12:20 PM

Ah! What would the holidays be without a little Bond. James Bond.