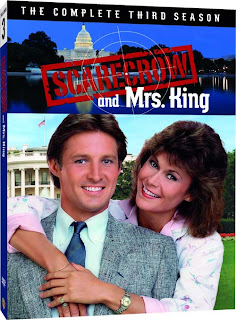 Whew! They're sticking to a yearly schedule, but I always get nervous around this time that Warner Bros. will abandon the traditional DVD format for the next season of Scarecrow and Mrs. King and decide to finish it as an MOD title at the Warner Archive. I've certainly got nothing against Archive titles, but the collector's nature in me doesn't want the format to change in the middle of a series. So I breathed a sigh of relief when TV Shows On DVD reported last week that Scarecrow and Mrs. King: The Complete Third Season would see a regular DVD release on March 20, 2012.  The 5-disc set will retail for $39.98—though of course it will be available for less through the usual online outlets.

Scarecrow and Mrs. King, which was really the only bona fide hit spy series of the 1980s on American television, pairs professional secret agent Lee Stetson (Bruce Boxleitner), codename "Scarecrow," with perky Washington housewife Amanda King (Kate Jackson). It's light and played for laughs and romance over thrills, but at it's best it sometimes evokes the spirit of The Avengers, were that classic transplanted to Reagan-era American suburbia. Read my review of Scarecrow and Mrs. King: The Complete First Season here.
Posted by Tanner at 12:53 AM