New Spy Books Out This Week: Another With Clancy's Name On It 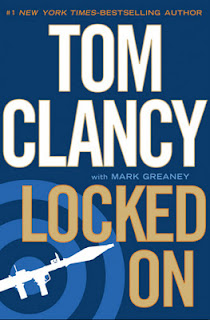 When Tom Clancy emerged from his years-long hibernation last Christmas with Dead or Alive, I was excited. Clancy was one of the best spy writers of the Eighties and Nineties, too long absent from the scene. When he delivered a new Jack Ryan novel six months later, Against All Enemies, I was even more excited. But neither book lived up to its potential. Both were written with co-writers (something he'd never done before for his flagship Ryan series before), but I'm hesitant to blame the co-writers. I think Clancy himself bears the brunt of the blame for the product he puts his name on. And today, there's another new book out out with Tom Clancy's name on the cover in great big letters. It's called Locked On, and it's got Jack Ryan and all the characters you used to love who go with him: John Clark, Ding Chavez, etcetera. The little tiny name underneath Clancy's is actually that of a successful spy novelist in his own right, Mark Greaney, creator of the Gray Man series (the first book of which is being developed as a potential star vehicle for Brad Pitt). I'm in the midst of his first novel, The Gray Man, right now... and so far I'm not terribly impressed. With early reports indicating that Clancy's phoned it in again, I guess I'm just going to have to turn to the movies instead and hope that Paramount delivers the Jack Ryan I want whenever they finally get this forever-in-the-works Chris Pine reboot off the ground. But here's hoping I'm wrong, and someone can tell me that Locked On is first-rate Clancy. I'd be happy to eat my words.
Posted by Tanner at 6:34 PM

The Grey Man goes so over the top by the end of the book it not only broke my suspension of disbelief, it shattered it.

I eventually threw the book across the room because it became so ridiculous.

I won't read another.

I really don't think Clancy has much - if anything to do with these novels now. He took the money and ran - to some extent I don't blame him. But he's not doing much for his former reputation.

Then again, he's made so much dough he probably doesn't care now. More money rolling in and he doesn't have to lift a finger.

Wow, it gets EVEN MORE over the top at the end, Bish? Yikes. It was pretty out there from the beginning. Oh well, I'll stick it out, but I appreciate the warning. I doubt I'll be reading another, either.

Simes, I suspect that these new ones are all about movie rights. Clancy was doing just fine with his cottage industry of possessive titles written by others like the Tom Clancy's Op Center and Tom Clancy's Net Force books, etc. And then he didn't feel a need to dilute Jack Ryan; he just wasn't writing any.

Now, I think when Paramount went off and developed the new Jack Ryan movie with an original story not based on any Clancy material, he got scared. There's big money in the movies (even if he's hated most of them so far), and he doesn't want to miss out. All of these recent books feel like film pitches padded out into novels. (And, honestly, some of them - especially Dead or Alive - might make good movies yet, and might actually BENEFIT from the Hollywood development process.) It seems like he can't be bothered to actually write new novels on his own anymore, but getting that authorship credit is crucial to getting the Movie Money, so he's finally caved in and farmed out Jack Ryan to continuation authors as long as his name remains prominent as an actual co-author, no matter how much he actually contributes. That's my own take on it, at least. Maybe one day he'll feel inspired to actually write an entire novel on his own again for the sake of the book itself, and not the film deal.

The Grey Man was a piece of repetitive trash.
First, he has to kill three people,then six people, then 10 people and by the end it has become an exercise in outrageous repetitive boredom. I'm not sure my numbers are exactly correct, but you get the idea.