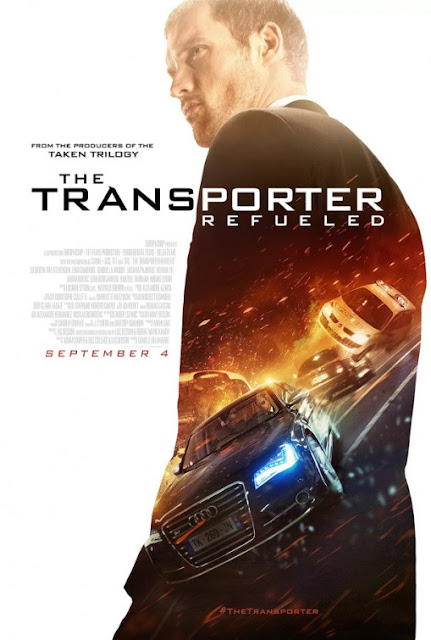 EuropaCorp have released a new (better) poster for The Transporter Refueled, this one reflecting the new release date of September 4, 2015. The reboot, intended to kick off a new trilogy of over-the-top neo-Eurospy action, stars Ed Skrein stepping into the very large shoes of Jason Statham as professional transporter Frank Martin. It is unrelated to TNT's Transporter TV series with Chris Vance, though director Camille Delamarre did cut his teeth on a few episodes of the show.
Posted by Tanner at 2:19 AM

Are all men guilty of sin because of Adam's sin in the Garden of Eden? No, they are not. Will men spend eternity in hell because Adam sinned? No, they will not.

Original advocates present Romans 5:19 as a proof-text for original sin.

Are all men made righteous because of the obedience of Jesus? No, they are not. Men become righteous only if they are obedient to the gospel plan of salvation.

Romans 3:23 for have sinned and fall short of the glory of God (NKJV)

All men become sinners because all men sin.

James 1:14-15 But each one is tempted when he is drawn away by his own desires and enticed. 15 Then, it gives birth to sin; and sin, when it is full-grown, brings forth death. (NKJV)

Temptation comes before sin. Babies in the womb are not tempted. Infants do give into the desires of fornication, drunkenness, theft, murder etc. Only those who know good from evil are capable of sin.

Romans 5:12 Therefore, just as through one man sin entered the world, death through sin, and thus death spread to all men, because all sinned---(NKJV) [BECAUSE ALL SINNED]

Adam introduce sin into the world. All men will die physically because of Adam' sin. Men will suffer spiritual death, because they themselves sinned.

2 Corinthians 5:10 For we must all appear before the judgement of Christ, that each one may receive the things done in the body, according to what he has done, whether good or bad.(NKJV)

Men will be judged according to things they have done. Men are not going to be judged by what Adam and Eve did in the Garden of Eden.

The only way to escape the punishment of sin is forgiveness through Jesus Christ.


ORIGINAL SIN IS NOT FOUND IN THE BIBLE, IT IS A MAN-MADE DOCTRINE.