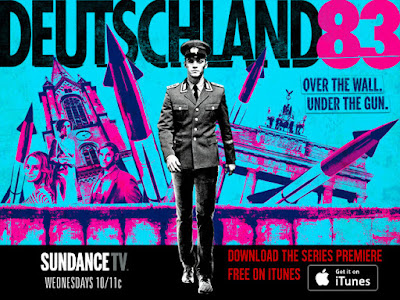 Did you miss the premiere of Sundance's fantastic new Cold War spy series, Deutschland 83? Well, don't worry! You can download the series premiere for free on iTunes. And I definitely recommend doing so. This German import is something special, and I'll have my full review up in the next few days. In the meantime, here's the official synopsis from Kino Lorber:


A coming-of-age drama set against the culture wars and political events of Germany in the 1980s, Deutschland 83 was filmed across several locations in Berlin including the Berlin Stasi-Museum, located on the former grounds of the headquarters of the GDR Ministry for State Security

The series follows Martin Rauch (Jonas Nay) a 24-year-old East Germany native who is sent to the west as an undercover spy for the Stasi foreign service. Hiding in plain sight in the West German army, he must gather the secrets of NATO military strategy. Everything is new, nothing is quite what it seems and everyone he encounters is harboring secrets, both political and personal.

I've watched the first two episodes of this and it's great. I'm already lost plot-wise, though, as there was one (or maybe two) twist in the 2nd episode that's got me confused. There's a fair bit of humour, more than we normally get in The Americans, for instance. It's not laugh-a-minute, but it's there.

One thing I'd hold against it is that it looks a bit too good; a bit too stylish. The one thing about the 80s that everyone forgets is that everybody was trying to be stylish, but nobody managed it because what was stylish changed every five minutes!