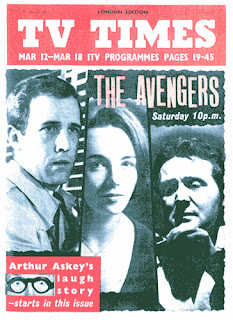 Wow, there is a lot of truly exciting spy news breaking today! In addition to the announcement of a new James Bond novel from Anthony Horowitz comes some fantastic news for Avengers fans.My wishful thinking 2010 April Fool's post has come partially true. (Reading that all these years later, I'm kind of astonished at the amount of time I must have spent on that constructing a narrative of so many trivial details!) Not the whole season, sadly, but one more episode of the mostly lost first season of The Avengers has been discovered! Most of the first season has been considered lost for decades thanks to the unfortunate UK practice of "wiping" tapes. Videotaped series, seen at the time (so long before DVD or streaming media) as ephemeral, were simply recorded over to make room. Other notorious victims of wiping include (sadly) many of the monochrome episodes of Callan, most of the second season of Adam Adamant Lives! and, most famously, many early Doctor Who serials featuring the first two Doctors.

Avengers scholar extraordinaire Alan Hayes, co-author of the definitive book on the show's first season, Two Against the Underworld (a must-buy for any curious fan!), provides most of the background in a post on his wonderful Avengers Declassified website, but it was Spyvibe's article on the subject that first caught my attention. A 16mm film print of the 20th episode, "Tunnel of Fear," was discovered by Kaleidoscope's Chris Perry. "Tunnel of Fear," set at a seaside funfair, was one of the highlights of the most recent volume of Big Finish's excellent audio recreations of the lost episodes, so I very much look forward to seeing how close they got it! The episode features both Patrick Macnee's John Steed and Ian Hendry's Dr. Keel, and Steed goes undercover in a harem, which sounds wonderfully appropriate.

For those lucky enough to live near Birmingham City University, "Tunnel of Fear" will be shown in November at this year's annual Missing Believed Wiped festival. As for the rest of us, apparently rights holders StudioCanal have been contacted, so hopefully they will find a way to get it onto DVD for the masses before too long. And hopefully more believed lost first season episodes will continue to turn up as dedicated TV scholars continue to tirelessly search for them!
Posted by Tanner at 11:26 AM