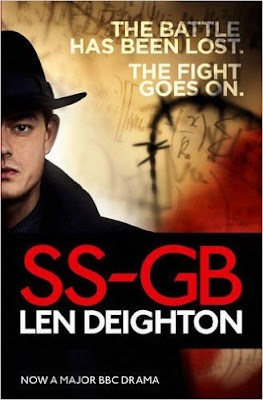 The BBC has finally put out a trailer for their adaptation of Len Deighton's alternate history spy novel SS-GB (first reported on in November 2014). Set in an alternate 1941 in which Germany successfully invaded Britain, the story follows a police detective (Sam Riley) in Nazi-occupied London as his routine murder investigation leads him into a conspiracy of espionage, atomic secrets, and the fate of the world. Kate Bosworth co-stars. Regular James Bond scribes Neal Purvis and Robert Wade penned the 5-part miniseries, which premieres this month in the U.K. While The Weinstein Company partnered with the Beeb for U.S. distribution, no American network or premiere date has yet been announced. TWC and BBC last partnered on War and Peace, which aired domestically on Lifetime.

Can't wait! Excellent book, one of Deighton's best. Looking forward to seeing how it translates to TV.

Starz picked this one up and it's available on demand. It's a 6 parter from them (rather than 5). Thoroughly enjoying it - on episode 5 now.