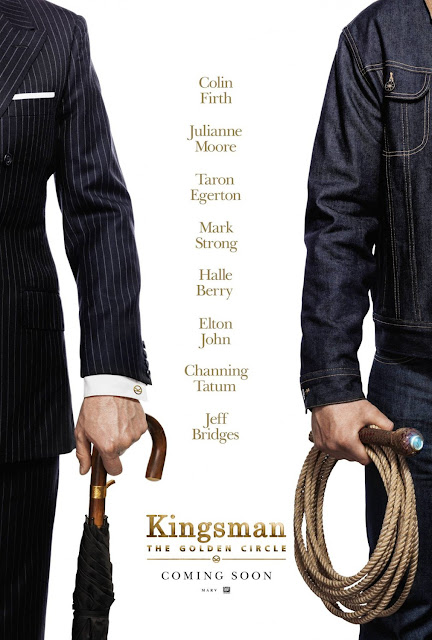 I was not a fan of the first Kingsman movie, but that doesn't mean I'm not excited for the sequel. I still like the premise, and I hope that this time Matthew Vaughn delivers on it with a little more fun and a little less gratuitous and offputting graphic violence. In Kingsman: The Golden Circle, Eggsy (Taron Edgerton) and Merlin (Mark Strong) encounter their American counterparts at the secret U.S. spy agency Statesman. Cue that favorite English stereotype of all Americans as cowboys. While the British stereotype (from the first film, but really borrowed from The Avengers) remains well-tailored suits and brollies, the American one is apparently jeans and whips. I would hazard that a larger percentage of Englishmen actually do carry umbrellas than Americans whips. I've lived in three very different geographical parts of the United States and never seen anyone with a whip in public outside of Indiana Jones cosplayers at Comic-Con.... Makes for great teaser poster iconography though!
Posted by Tanner at 6:47 PM

I didn't mind the first film, but it fell apart for me in the third act when that Dutch princess makes an offer to Eggsy if he saves the world. That line/scene just seemed to go totally against the film's notion about "gentlemen".
It'll be interesting to see how they (SPOILER ALERT!!!) - bring Hart back into their universe- (SPOILER OVER!!!) but it appears like a good cast is lined up for this film.
I'd watch Juliane Moore read a newspaper.

The church scene went on too long and was way too off-beat. My view echoes Matthew's: love the iconography and call-backs to other spy properties and, as I adore The Avengers, it was great to see Steed reflected in Harry Hart, but there was also too much weird over-the-top violence. Here's hoping the sequel doesn't share that.