This is perhaps the most exciting news I have ever written about here, in my ten plus years of blogging about fictional spies. It was announced today that John le Carré, the master of the espionage genre (and my personal favorite writer of all time) will publish a new novel about his most famous protagonist, George Smiley, in the fall. A new Smiley novel! Can it possibly be true? It is! There's a plot description on the author's website and even a pre-order listing on Amazon. A Legacy of Spies will be published September 5, 2017, in the United States, and September 7 in Britain. Here is the official description:

Peter Guillam, staunch colleague and disciple of George Smiley of the British Secret Service, otherwise known as the Circus, is living out his old age on the family farmstead on the south coast of Brittany when a letter from his old Service summons him to London.  The reason? His Cold War past has come back to claim him.

Intelligence operations that were once the toast of secret London, and involved such characters as Alec Leamas, Jim Prideaux, George Smiley and Peter Guillam himself, are to be scrutinised under disturbing criteria by a generation with no memory of the Cold War and no patience with its justifications.

Interweaving past with present so that each may tell its own intense story, John le Carré has spun a single plot as ingenious and thrilling as the two predecessors on which it looks back: The Spy Who Came in from the Cold and Tinker Tailor Soldier Spy.

So not just Smiley will be back, but also many of our other favorite characters from the earlier novels, including Guillam (whose role was disappointingly small in the previously final Smiley outing, The Secret Pilgrim) and even Alec Leamas, hero of The Spy Who Came in from the Cold! (Le Carré once seemed sworn against ever writing about him again, joking in his introduction to a later edition of The Looking Glass War that at the time of its initial publication, all the UK public seemed to want from him was Alec Leamas Rides Again.) Penguin editor Mary Mount provides some further fascinating hints of what we can expect from A Legacy of Spies on the Penguin website. "A Legacy of Spies asks questions about how we reckon with the past and with our political history," she writes. "As with all of le Carré’s fiction, it brilliantly illuminates human folly and our frailty. The pain, the clarity, of hindsight is so beautifully rendered showing how the passage of time fully exposes acts of violence, framed as utterly necessary at the time, for what they are."

Le Carré has always prided himself on staying topical and never looking" back, never dwelling on the past. When the Berlin Wall came down, many critics tried to write him off, but he not only stayed aggressively relevant in the post-Cold War world; he produced some of his greatest work against the backdrop of the New World Order (The Night Manager, Our Game) and the War on Terror (A Most Wanted Man). Perhaps writing his memoirs, The Pigeon Tunnel (published last year) got him in a more reflective mood and inspired him to revisit his beloved Cold War characters, but it certainly sounds like he's found a way to do so while still remaining doggedly current, which seems appropriate, especially in a time when half the daily headlines seem torn from the pages of a le Carré novel!

George Smiley first appeared as the protagonist of le Carré's first novel, Call for the Dead (1961), and served the same role in his second, A Murder of Quality (1962). The character took a backseat in his next two books, playing a more minor role in The Spy Who Came in from the Cold (1963) and The Looking Glass War (1965), before taking center stage once more in the epic "Quest for Karla" trilogy, beginning with Tinker, Tailor, Soldier, Spy (1974), and continuing with The Honourable Schoolboy (1977) and Smiley's People (1979). Just as the character never seemed to be able to retire from "the Circus" (as British Intelligence is known in le Carré jargon), the author never seemed quite ready to retire his character. He brought George back (again relegated to a secondary role) for a swan song in The Secret Pilgrim (1990), his eulogy for the Cold War. "It's over, and so am I. Absolutely over," Smiley told a gathering of MI6's latest recruits. "Time you rang down the curtain on yesterday's cold warrior... The new time needs new people. The worst thing you can do is imitate us." And so he exits, leaving them with one final piece of advice: "We've given up far too many freedoms in order to be free. Now we've got to take them back." Even that exit, it now seems, was not, absolutely, his final. I suspect the new novel will develop that final theme further.

Two other le Carré novels, The Russia House (1989) and The Night Manager (1993) are set in the same world and feature some of the same characters, but not Smiley himself. They form a loose trilogy with The Secret Pilgrim as the middle book. The latter, which was made into a successful miniseries last year, features Smiley's Secret Service protege, Burr.

Smiley himself has been portrayed many times on screen, most famously by Alec Guinness in a pair of BBC miniseries and most recently by Gary Oldman in Tomas Alfredson's 2011 feature film adaptation of Tinker Tailor Soldier Spy. Presumably, he'll next be seen on the small screen in the forthcoming miniseries version of The Spy Who Came in from the Cold (previously filmed in 1965). 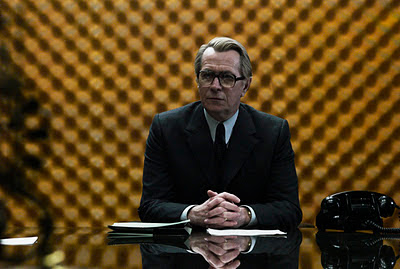 So basically, I'm gonna have to take another crack at the Karla Trilogy before September. I started reading " Tinker, Tailor" back in my teens and got to about page fifty (so much backstory on Prideaux!) before putting the book back on the shelf. I'd gotten too used to Fleming. Yes, yes, I know, Le Carre and Fleming are poles apart. I'm 51 now. I think I'm ready to take another shot at it.
Read "The Spy Who Came In From The Cold", "The Looking Glass War" and "The Russia House" over the years. Watching the remake of "Tinker Tailor" and the excellent "The Night Manager" mini-series has resparked my interest in Le Carre's work. I had already begun snapping up second-hand paperbacks of his books in recent years and I think I'm about ready to re-enter the Circus now that I'm older (if not wiser) and prefer my espionage fiction a little more mature.
Thanks for the news about this new Smiley book. I began reading "Call For The Dead" a few months ago, but stopped after the first chapter because I had two there books on the go at the same time. I've been told that it's more of a Poirot story than a spy story, but I loved the portrait that Le Carre painted of George Smiley in the first chapter. In the novels, you can't imagine neither Guinness or Oldman as Smiley.
Looking forward to this new book, and I'm glad that you're so thrilled about it too, Tanner.