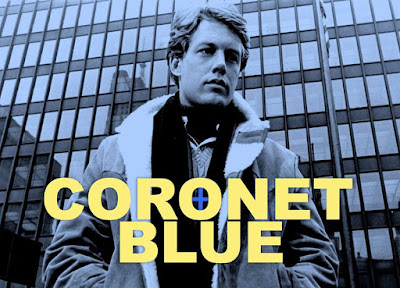 Well, here's a welcome surprise! Kino Lorber announced today on their Facebook page that they will release one of the few remaining American spy shows of the Sixties not yet on DVD later this year! The elusive CBS series Coronet Blue, starring Frank Converse, was shot in 1965 but not aired until 1967 as a summer replacement series. It sounds like The Fugitive meets The Bourne Identity... though of course it pre-dated Robert Ludlum's book by more than a decade. The intriguing premise has long put this one need the top of my DVD wish list, and I'm thrilled that I'll finally have a chance to see it! Here's how Kino Lorber describes the series: "In this espionage thriller, Michael Alden (Frank Converse) is an amnesiac double agent in search of his true identity, while assassins of a mysterious syndicate are trying to locate and kill him." The strange (and probably detrimental) title comes from the few, seemingly nonsensical words that Converse can remember: "Coronet Blue." Coronet Blue: The Complete Series will include all 13 episodes - two of those never aired during its original run. Unfortunately, the show was cancelled before its central mystery could be solved, but one extra announced for the DVD is sure to clear that up. There will be a new interview with series creator Larry Cohen (whose career has encompassed everything from Sixties spy shows like Espionage and Blue Light to Eighties schlock classics like Maniac Cop and 21st Century high-concept thrillers like Phone Booth and Cellular), who has never been shy in sharing where he intended for the series to go. (Don't read the show's Wikipedia page, for example, if you don't wish it spoiled before you get to watch these DVDs.) So while the show may not have an ending, at least, unlike with The Sandbaggers, we can watch the creator describe what would have happened had it continued.

It's been years since we've gotten a new release of an American Sixties spy series on DVD! (I think Jericho was the last one, and that Warner Archive set of Man From U.N.C.L.E. producer Norman Felton's 1966 WWII espionage drama happens to currently be on sale for a ridiculously low price on Amazon!) I never expected to see Coronet Blue get this treatment, and it's a most welcome announcement. Notable titles remaining MIA include Blue Light (also created by Cohen), Amos Burke: Secret Agent, The Double Life of Henry Phyfe, and, most of all, T.H.E. Cat. Let's hope some of those also turn up out of the blue in the months ahead!
Posted by Tanner at 1:58 AM

Blue Light is a must if only to see Robert Goulet out maneuver the Nazi's every week and not get a hair out if place. I remember one episode he actually ran across Allied lines during an artillery barrage, delivered his spy goods, out witted the Col. Klink of the week and made it back to Berlin to do his radio show. Perfection!

Amos Burke, Secret Agent isn't available, but it should NOT come out until after the second season of Burke's Law is made available. First things first!

The only Blue Light DVD out there is the Complation Movie- "I Deal in Danger", which I got for $7.00 at FYE. I love all the classic spy tv show.

Another overlooked 60s spy show was the short-lived The Man Who Never Was with Robert Lansing and Dana Wynter. It was shot on location throughout Europe.

Oh, good call, Scott! Yes, that's another one I'd definitely like to see on DVD. Another one I missed in my list that someone else pointed out is FIVE FINGERS. Still, we're definitely closing in on all the U.S. Sixties spy shows. There are so many more missing British ones... and sadly, due to the policy over there of "wiping" shows, most of them are never likely to turn up.

Yeah, Solo04; it's certainly cool that we've got that stitched-together-episodes movie at least, but we really need the whole show! What you describe sounds great, Sgspires68!

And I agree, Mark. They need to finish BURKE'S LAW, including the SECRET AGENT years. But only that (inferior, nigh unwatchable) re-tooling applies here!

I agree with wanting to see T.H.E. CAT remastered to color and released on DVD but he wasn’t a spy. He had been a circus performer and jewel thief and currently was a professional bodyguard. Here is the opening to T.H.E. CAT https://www.youtube.com/watch?v=PbH1_48IrjA&t=87s
There are episode on YouTube as well. I recommend “The Sandman.”

Here is another forgotten 60s American TV spy series to remember, JOHN FORSYTHE SHOW. A sitcom about a girl school turned into a spy show in middle of series short run.

Yeah, T.H.E. Cat wasn't a spy, but still trades on the tropes of the genre and therefore qualifies for consideration in my book. (I'm fairly loose with the definition. I consider THE SAINT a spy show, too, though Simon Templar isn't a spy either.) I've got the bootlegs of T.H.E. CAT, but the quality so poor as to be almost unwatchable. (Same as the ones on YouTube.) I would really LOVE to see proper DVDs! I've heard rumors the masters were destroyed in the fire at Universal several years ago, but I hope that's not true.

Wow! I'd never heard of THE JOHN FORSYTHE SHOW! Thank you! Definitely something I'll need to look out for.

I bought Coronet Blue. Several of the stories don't work but I enjoy the trippy, way-out 60s vibe that really can't be emulated today. Larry Cohen's explanation of what Michael Alden was before getting conked on the cranium sounded plausible yet it doesn't hold up.

This series could also boast the most inept professional assassins ever. They would either miss him or only wound him, injuring or killing other people. These guys needed vision exams.

This is a bare bones package which is a disappointment. No subtitles, no commentary, no liner notes by any TV historians. Frank Converse is notably absent. Cohen mentioned hiring Converse years later for a TV movie and said that Converse didn't want to discuss Coronet Blue.