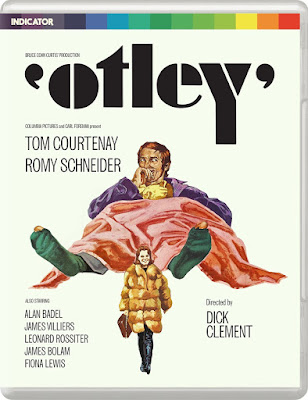 Wow! UK distributor Indicator, who released that terrific Blu-ray special edition of The Deadly Affair last year, have announced a new spy title. And it's one of my favorite spy movies of all time, and one I never expected to see on Blu-ray--Otley (1969)! Adapted by the great Dick Clement and Ian La Frenais (Never Say Never Again, The Bank Job, Spies of Warsaw) from the novel by Martin Waddell and directed by Clement, Otley plays like a comedic version of the Len Deighton school of spy story. Like The Ipcress File, it owes as much to Raymond Chandler as it does to the spy genre, with a terrifically irreverent and in-over-his-head antihero played to perfection by Tom Courtenay (A Dandy in Aspic). Otley deserves to be mentioned in the company of Billy Liar and The Loneliness of the Long Distance Runner when it comes to Courtenay's career-defining performances, and it's a shame it's not better known.

Gerald Arthur Otley fancies himself an antiques dealer, but is really more of a small-time thief who sleeps on the couch of whatever friend will put him up (and put up with him) until he wears out his welcome. Then he suddenly finds himself mixed up with all sorts of spies, never certain how he got into this mess or how he can get out of it. The entire cast is a who's who of spy actors (most of them recognizable from memorable guest appearances on The Avengers and The Saint), including Romy Schneider (Triple Cross), James Villiers (For Your Eyes Only), Alan Badel (Arabesque), Leonard Rossiter (Deadlier Than the Male), Geoffrey Bayldon (Casino Royale), Ronald Lacey (Raiders of the Lost Ark), James Cossins (The Man With the Golden Gun), and Edward Hardwicke (The Return of Sherlock Holmes).

Like The Deadly Affair and other Indicator releases, the Otley Blu-ray is a limited edition (limited to 3,000 copies), and loaded with copious special features including:
Now I hope that Indicator have their eyes on Clement and La Frenais' previous scripted feature, The Jokers (directed by Michael Winner). That one's not a spy movie, but it's a terrific caper picture every bit as charming and entertaining as Otley, and another wonderful time capsule of London when it swing.

The limited edition Blu-ray of Otley is available for pre-order on Amazon.co.uk for the very reasonable price of just  £14.99.
Posted by Tanner at 4:15 PM