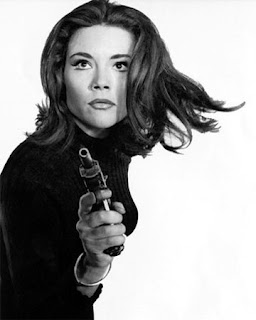 Well, the big spy news of the day is undoubtedly the potentiality of a Shane Black/Fred Dekker-penned TV reboot of the greatest spy series of all time, The Avengers. Dekker dropped the news in an interview with print magazine The Dark Side, which then hit the Internet courtesy of Screen Rant. There are very few solid details available, but here is what Dekker told the magazine, verbatim:


It’s The Avengers, with John Steed and Emma Peel. We’re setting it in Britain in the 60’s, and our approach is The Ipcress File meets Doctor Who. At this moment, it’s my favorite thing we’re working on.

That's all we know so far from the horse's mouth. (And I have to say... I quite like Dekker's description!) The studio appears to be Warner Bros. Television. We don't know if there's a network involved, but it might be Amazon, for whom Black and Dekker previously penned the Western pilot Edge (which did not go to series), based on the 1970s Men's Adventure paperback series.

While my gut reaction is to instantly decry any attempt at an Avengers revival that doesn't originate in Great Britain, that impulse is checked by the creative talent involved. Shane Black is one of the greatest working screenwriters. He rose to fame on lucrative action spec script sales in the 1980s and '90s, most famously creating the Lethal Weapon franchise. His spy cred includes the 1996 amnesiac assassin thriller Long Kiss Goodnight with Geena Davis and Samuel L. Jackson. In this century, he's reinvented himself writing and directing smart, funny, pulpy neo-noir fare like Kiss Kiss Bang Bang and The Nice Guys. He's even made a Marvel movie--Iron Man Three.

Early in his career, Black wrote with frequent collaborator Fred Dekker, a partnership that most famously produced The Monster Squad (1987), which Dekker directed. Dekker went on to a less illustrious career than Black, but also earned his bona fides in the spy genre writing the 1991 Richard Greico teen spy comedy If Looks Could Kill and penning a glorious, but un-produced, live-action, 1960s-set Johnny Quest movie. The two partners reunited in recent years to pen the upcoming Predator reboot which Black is directing and the aforementioned Amazon pilot.

All of which is to say that The Avengers are in good hands. American hands, maybe, but hands I'm willing to trust for now. In all likelihood, this will go nowhere. But if it does, I'm willing to take the journey. It can only be an improvement on the 1998 feature film version of the series, which starred Ralph Fiennes, Uma Thurman, and Sean Connery.

Patrick Macnee and Diana Rigg, of course, starred as agents extraordinary John Steed and Emma Peel in the original TV series. Steed's other partners included Dr. David Keel (Ian Hendry), Cathy Gale (Honor Blackman), and Tara King (Linda Thorson). The Avengers torch has been kept burning lately in audio dramas from Big Finish (including excellent recreations of lost first season episodes) and comics from Boom! Studios (including a recent crossover with the 1960s TV incarnation of Batman).
Posted by Tanner at 12:01 AM

While 'The Ipcress File' meets 'Doctor Who' is very promising and suggests that these guys have a deep understanding of what 'The Avengers' was about, it's hard to imagine that they'll to find a way recreate the essential component that was Diana Rigg in her prime. You'd need somebody with more than the looks and the talent of an Emily Blunt or an Alicia Vikander, and they'll be unlikely to get even that for a TV series.

I saw Rigg on the London stage in Shaw's 'Pygmalion'in, IIRC, 1973. Rigg could have been a huge, huge star, but disdained Hollywood by and large for the theater.

The casting will be so important. Personally, I think it's a mistake to even consider recasting Steed & Peel, but at least they aren't transplanting them to modern day America.

Had this been done earlier, I would have suggested Jaime Murray for Mrs Peel, but she's a bit too old now. I think Emilia Clarke could make a good job of it.
I suspect John Steed would be even harder to recast.

I would have preferred a modern day follow up with all-new lead characters building on the original series. Joanna Lumley's Purdey could be the new Mother. Even better, they could maybe get Diana Rigg, Linda Thorson & Honor Blackman to reprise their roles in an episode.

The potential is exciting! I have been dreaming of a reboot featuring Eddie Izzard and Hayley Atwell.

I agree, guys; it will certainly all come down to casting. (Should this project ever make it that far, of which I remain dubious.)

I like your idea, Jeffry Willis! In 2014 Bryan Fuller expressed a desire to reboot THE AVENGERS with Izzard as Steed, but I had forgotten about that.
http://doubleosection.blogspot.com/2015/11/bryan-fuller-wants-to-reboot-avengers.html

I could imagine Hugh Bonneville or James Purefoy (somewhat against type) as two very different but both potentially good Steeds as well. For Emma my mind immediately made the obvious and rather boring leap to Rachael Stirling, but I think she'd turn it down. Jenna Coleman might be good, but she seems tied up with QUEEN for the foreseeable future. I do like your Hayley Atwell idea! (Though the last time she starred in a reboot of a Sixties spy classic the results were not good...)

Actually, Hayley Atwell ain't a bad suggestion at all. Atwell does have that 'something extra.'

Atwell would be good. Steed's a tricky one... I can see Sanjeev Bhaskar pulling the role off, he's got the right sort of twinkle.

Though to be honest, my main thought was, "If you want an Avengers set in the Britain of the 1960s with Steed and Peel as the lead characters, why not just watch the original?"

"If you want an Avengers set in the Britain of the 1960s with Steed and Peel as the lead characters, why not just watch the original?"

I think for the same reason that I enjoy contemporary fiction, but also enjoy historical fiction as well. The Avengers was contemporary at the time, but now it will be historical. The distance of time will give smart writers perspective on the era that no one could've had in the midst of it.

Where are all the writers who can create original concepts, not cash in on the shows and characters of the past?

Well, those WRITERS are everywhere. Every screenwriter would rather sell an original concept than reboot an old one, and every screenwriter worth his or her salt has a thick folder full of such spec scripts! But sadly it's not up to them. It's up to the studios and networks, who feel much safer exploiting a known IP (or even a vaguely remembered one) than taking a chance on something original. The writers are as frustrated as audiences about that, if not more so. (Creating an original IP is also more lucrative for them.) It used to be that you wrote spec scripts with an aim to selling them. Now the best you can hope to get off of a good spec is a chance to pitch on an existing franchise of some sort. That said, there are certainly franchises that, within these frustrating limitations, certain writers would jump at an opportunity to work on. And it seems like Black and Dekker felt that way about THE AVENGERS.

Granted but look at the studio/network financial flops of reboots. The Wild Wild West, The Avengers, I Spy, Baywatch, The Prisoner, the list goes on. And they're not stopping, both TV show and movie reboots. The suits are not paying attention as usual.

Absolutely. Yet they're constantly lured by the prospect of another MISSION: IMPOSSIBLE or 21 JUMP STREET despite all those flops. And terrified of pulling the trigger on an original spec that might ultimately prove even more lucrative. Even the biggest new spy franchises (KINGSMAN, ATOMIC BLONDE) had to be based on existing (comic book) IP's for the studios to roll the dice. (And I'm glad they did, particularly in the latter case... I just wish they'd also consider original film ideas.) SPY was a hit that was purely original, but of course it was sold on star power.