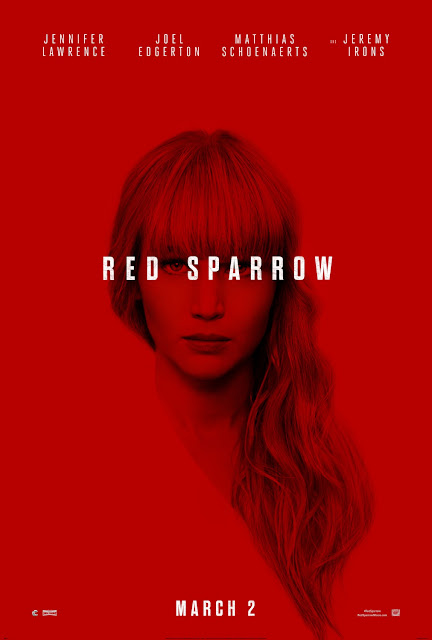 20th Century Fox has released a new trailer and a very cool poster for Red Sparrow, the upcoming movie adaptation of Jason Matthews' terrific 2013 spy novel  (which made my list of the best spy novels of the last decade). The trailer makes it clear that certain changes have been made to the material, but of course that's to be expected in any adaptation. The movie is clearly being positioned as a star vehicle for Jennifer Lawrence as Dominika Egorova, whereas the book is a two-hander focused equally on Russian double agent Dominika and her CIA handler Nate Nash, played on screen by Joel Edgerton. (I'm still not sold on him in that role, but none of the trailers so far have shown enough of him to really go by.) Red Sparrow, directed by Francis Lawrence (no relation to Jennifer, though he previously worked with her on several Hunger Games movies), opens March 2. If you haven't yet read the book, I highly recommend doing so before then! The third and final book in Matthews' Egorova/Nash trilogy, The Kremlin's Candidate (the improbably topical plot of which has apparently undergone some changes since it was first announced), hits stores two weeks earlier, on February 13.