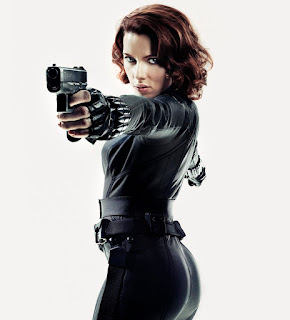 Apparently the standalone Black Widow movie we heard chatter about in January is indeed quietly moving forward with women in key creative positions, even though Marvel Studios has resolved not to officially announce any future movies until after their fourth Avengers film premieres next year. (Just to clarify, I mean Marvel's Avengers, obviously, not the real Avengers, and I mean the next Marvel Avengers movie, not Avengers: Infinity War, which opens tonight and is expected to break just about every box office record.) But we still heard in January that Jac Schaeffer, a female screenwriter, had been hired to pen the script, and now, buried at the end of an article about Paramount hiring a female director for the next Star Trek movie, The Hollywood Reporter lets slip that Marvel are keen to hire a female director for female superspy Black Widow's solo debut. The trade reports that the studio has met with such filmmakers as Deniz Gamze Erguven (the acclaimed Turkish movie Mustang), Chloe Zhao (The Rider) and Amma Asante (A United Kingdom), among several others, but there is no clear frontrunner and the search remains ongoing. Asante's name may stand out for spy fans, as she's just signed on to direct a film of the popular book about legendary Cold War spy Adolf Tolkachev, The Billion Dollar Spy.

Presumably Scarlett Johansson would reprise her role from various Marvel Studios movies as Russian superspy Natasha Romanoff in any Black Widow movie. Despite Johansson being the only Avengers cast member to gross $450+ million in her own original movie outside of that franchise, it has taken Marvel much too long (and probably the success of Wonder Woman and Atomic Blonde) to realize the potential for a female-driven film. (Their first will be Captain Marvel, due next year.) Now that they are finally taking notice of the massive audience for such a movie, it's nice to see them lining up women behind the camera as well as in front.

Read more about the Black Widow comics the film will likely draw from and the character's screen history here.

UPDATE: According to a report on The Playlist, Marvel has actually met with upwards of sixty directors about the potential Black Widow gig! At least we know three of them....
Posted by Tanner at 8:33 PM