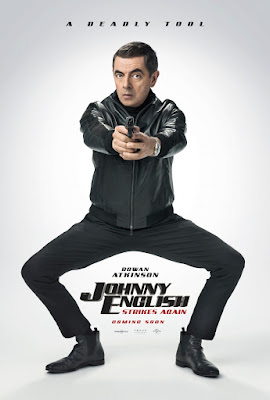 Universal has released the first trailer for the third Johnny English movie starring Rowan Atkinson, Johnny English Strikes Again. I think it's hysterical. For me, the English movies have always been superior to the Austin Powers (though the Jean Dujardin OSS 117 movies take the cake as far as spy parodies go), and I'm glad they keep coming. There are some Pink Panther-level gags in this trailer that crack me up. (And, of course, that no doubt intentionally resonant title.) I'm also very happy to see Ben Miller's Bough (English's straight man assistant, a highlight of the first film) back in a larger role.. though also sorry to see no sign of Daniel Kaluuya, the sidekick from the second film. (Obviously he's gone on to bigger things.) As usual, there's a stellar supporting cast including Olga Kurylenko (Quantum of Solace), Emma Thompson (The Love Punch), Jake Lacy (Miss Sloane), and a beautiful red Aston Martin V8 Vantage.