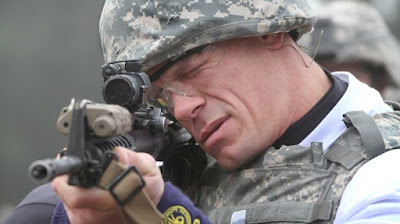 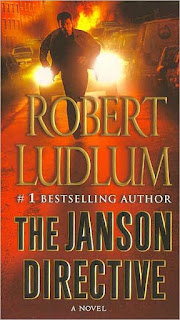 It's been a while since we've heard about any movement on the Robert Ludlum film front. After the success of the Bourne franchise, there were all sorts of reports of new adaptations of Ludlum bestsellers like The Chancellor Manuscript (at one point Martin Scorsese was supposed to direct Leonard DiCaprio), The Matarese Circle (once set to team Tom Cruise and Denzel Washington before the Cruise-run United Artists imploded), The Osterman Weekend (a remake once set to be Simon Kinberg's directorial debut, and later a vehicle for RED director Robert Schwetke), The Sigma Protocol (long in development with producer Irwin Winkle), The Parsifal Mosaic (Ron Howard and, tantalizingly, Zhang Yimou had both kicked the tires as potential directors), and The Janson Directive. That last one seemed the most likely to move forward, as the world's biggest star Dwayne "The Rock" Johnson was attached to topline, and because the Ludlum estate has kept a Janson book franchise going along the lines of the Bourne series, hiring other authors to pen continuation novels about Ludlum's sniper hero. (Even Ludlum's original Janson tale, The Janson Directive, was finished by another author, and published posthumously.) But it had been quite a while since we'd heard anything about this film, and I'd assumed it had gone the way of so many other projects (like Shane Black's Doc Savage) that Johnson attaches himself to but ultimately doesn't have room for on his busy slate. Apparently, that's not the case! Johnson must believe in the property, because he remains involved as a producer. But he's tapped a protege to take over starring duties on the Universal film.

According to The Hollywood Reporter, fellow wrestler-turned-actor John Cena will step in to star. Cena is hot right now, coming off of a major comedic success in Blockers after steadily building a mainstream comedy career with smaller roles in movies like Trainwreck, Sisters, and Daddy's Home 2 after first fizzling by following the typical wrestler path of paint-by-numbers action vehicles like The Marine (2006) and 12 Rounds (2009). He has, however, maintained his dramatic chops by appearing in Doug Liman's experimental Iraq horror movie The Wall. But most of all, he's proven himself to be an immensely charming and likable screen presence, much like Johnson. So it makes sense for the latter to anoint the former his successor. (Johnson first made the announcement on social media.)

In The Wall, Cena played a spotter for a sniper; in The Janson Directive he'll play a sniper himself - a former SEAL who now runs a private security firm and ends up taking on a younger female apprentice. The Ludlum novel (review here) saw Janson lead a team on a disastrous rescue mission that left him on the run from governments and terrorists alike. As he trotted the globe in an effort to clear his name, he ended up uncovering a conspiracy with ties to his own past military service and reaching (thrillingly) all the way to the highest levels of the U.S. government. Of course, in the post-Bourne Identity world there is no guarantee whatsoever that a Ludlum-based movie will actually follow much of the master plotter's plot. One key divergence is obvious already. The Janson of the book is the proverbial old gunslinger, a Vietnam vet now well past his prime and running form his past. That Janson would have been a great role for Liam Neeson. If any of Ludlum's plot is retained, presumably Janson's military service and the horrific incident that still haunts him will now take place in Iraq or Afghanistan.

The trade reports that James Vanderbilt (The Losers, White House Down) will pen the script from a story he and Akiva Goldsman (A Beautiful Mind) adapted together. (John Hlavin penned a previous draft for Universal.) The pair will also produce, along with Ludlum rights holders Captivate Entertainment's Ben Smith and Jeffrey Weiner and Johnson's regular producing partner Hiram Garcia. Johnson and Dany Garcia will executive produce. No director has yet been named.

With Cena set to star, I'm a lot more hopeful that this movie will actually happen! (His dance card isn't nearly as full as The Rock's, and he's at the perfect stage of his career to launch a new spy franchise.) And I always welcome any new Robert Ludlum based movies.