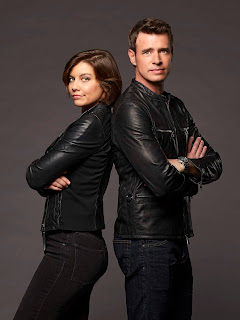 ABC announced this week that it had picked up the previously reported spy pilot Whiskey Cavalier to series. And they also unveiled a trailer! Bear in mind, this is one of those long, sort of cumbersome upfront trailers (designed with advertisers in mind, not audiences)... but it still looks awesome! This is exactly what I want from a network spy series. I really hope the show turns out to be as much fun as the trailer! Fulfilling the ancient prophecy that all the stars of Felicity would one day be spy stars (hey, Scott Speedman had his shot in xXx: State of the Nation, remember?), Scott Foley stars as a mostly by-the-book FBI agent just coming off a breakup who's assigned to partner up with a freewheeling CIA agent played by Lauren Cohan (who also stars in the upcoming summer spy movie Mile 22, whose trailer also dropped this week). Action, hijinks, and sexual tension ensue. And based on his memorable several seconds in the trailer, Dylan Walsh (Nip/Tuck) looks to have reinvented his career, brilliantly transforming himself from a ho-hum leading man to a scene-stealing character actor. I can't wait to see the show!