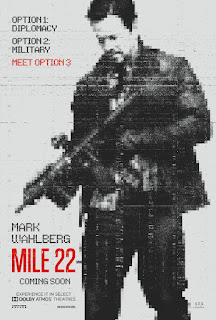 While it's likely to be eclipsed by the new Mission: Impossible trailer, STX is eager to make us aware that intense spy action is not the exclusive domain of Tom Cruise. The first trailer (a red band trailer) has dropped for Peter Berg's (The Kingdom) CIA actioner Mile 22, starring his frequent collaborator Mark Wahlberg (2 Guns) and envisioned as a franchise kickoff. And it's got lots of shooting, running, and blowing shit up in it. Mile 22 is co-written by Jack Ryan showrunner Graham Roland, who's clearly having a very spy-ish summer, and Lea Carpenter. John Malkovich (RED), Ronda Rousey (Furious 7), and Lauren Cohan co-star. This is, in fact, one of two Lauren Cohan spy trailers to hit this week! She also stars in the new ABC series Whiskey Cavalier, which looks great.