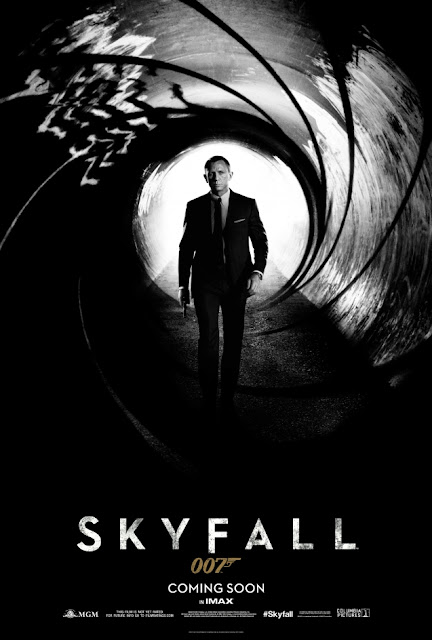 The first teaser poster for Skyfall, the 23rd official James Bond movie, was released today on 007.com. Personally, I love it! I can't wait to see that hanging in a theater, or see pictures of it adorning the Carlton Hotel at the Cannes Film Festival. It's not quite as original as the previous two Craig teaser posters, and it's certainly not as beautiful as the classic Bond posters (but as much as we might regret it, we all know that the days of McGinnis and McCarthy style artwork is sadly long past), but I like what it says... or what it seems, to me, to be saying, anyway. It's saying this is the Contemporary Bond, Daniel Craig, but he's in a classic Bond movie now. And after promising it on the teaser poster, Skyfall sure as hell better deliver on a classic gun barrel opening up front following the harsh disappointment of Mark Forster's inane decision to put it at the end. (It will also be interesting to hear a new composer's take on gun barrel music for the first time in 15 years.) 007.com also promises that the teaser trailer will debut on the site on Monday at 8:30am BST prior to airing before prints of Men In Black III in theaters.
Posted by Tanner at 11:15 AM

I like it, too! I also posted it on Spy Vibe with similar reaction. To me, this looks like gritty bond meets classic bond! Hope so.

I'm curious about the Thomas Newman score and what he will bring to the series. I'm hoping for Adele for the title song.