New Spy Comics Out Today: The Coldest City and Others 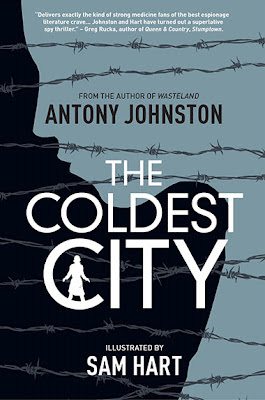 It's a big week for spy comics. First and foremost, today sees the release of a new spy graphic novel by one of my favorite comics writers, Antony Johnston (Three Days In Europe). After doing a great job with Greg Rucka's Queen & Country (in fact, Johnston is the only author besides Rucka to ever pen a a Q&C story story) and Anthony Horowitz's Alex Rider, Johnston introduces the world to his own spy creation, Lorainne Broughton, in The Coldest City from Oni Press. Years in the making (I first blogged about it back in 2009 when the title was "Cold City"), The Coldest City is a rare spy comic in the cerebral Len Deighton tradition set in Berlin during the final days of the Cold War and told in stark black and white, appropriately reflecting both the time and the place. On the eve of the fall of the Wall, there is one last spy story to be told, and Johnston tells it as a labor of love. I know that he's a huge fan of the genre, and that comes through in his comic. Johnston provides the twists and turns you'd expect from any spy comic, along with the wall crossings and the requisite corpses, but he also provides panel after panel of MI6 honchos at desks yelling at each other--and regular readers of this blog will know that I enjoy that sort of office politics in a spy story every bit as much as a bout of gunplay! (More, actually.) Fans of Greg Rucka and Len Deighton won't want to miss this. Here's the trailer: 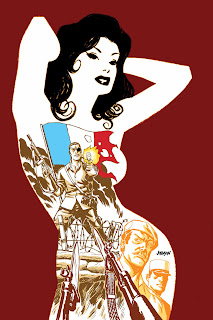 Also out today from Marvel Comics is the second issue of Garth Ennis's new Fury MAX series (first announced a year ago), also set during the Cold War. I was not a fan of Ennis' last attempt at a Nick Fury MAX miniseries (MAX is Marvel's mature readers imprint), and therefore went into this one with diminished expectations. But man did it blow me away! The first issue was everything I could possibly hope for from a serious Nick Fury espionage comic. Taking a cue from both The Ugly American (one of my favorite books ever) and The Quiet American, the promising series looks much closer in spirit to Ennis' serious historical war comics than his previous over-the-top MAX material. If the premiere issue is indicative of the issues to come, then I very much want to see this miniseries turn into an ongoing series, because the is exactly the sort of Nick Fury story I'd gladly tune in for month after month. (And the Cold War lasted a long time, in a lot of theaters...) 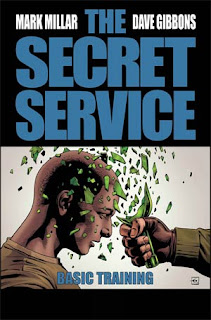 And finally, also from Marvel, and also from a maverick creator well known for his mature readers work (but decidedly not set in the Cold War), is issue 2 of Mark Millar's The Secret Service. This is the series he dreamed up with X-Men: First Class director Matthew Vaughn, and which Vaughn is mulling as his possible next movie after the X-Men sequel. The first issue was wildly uneven, but the artwork by Watchmen's Dave Gibbons was phenomenal and the premise of a delinquent London hoodie kid training to be the next James Bond is sound, so I'm definitely planning to sample the second issue.
Posted by Tanner at 7:49 AM