Despite my attempts to get back on a weekly schedule for this spy DVD round-up, I've gotten way behind again. Lots of truly great spy DVDs came out in April, and I will go back to them very soon. But for now, in another effort to get back on track, I'm skipping ahead to this week, when we have three cool new spy offerings. A good field agent should be covert, invisible, and possibly just a little bit haywire. This week's releases have all three covered. 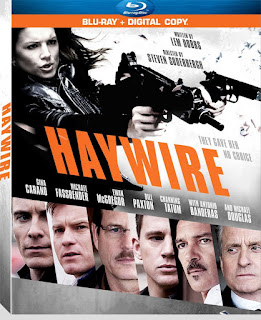 Steven Soderbergh's long-in-the-works action spy movie Haywire hit DVD and Blu-ray this week, and I truly hope it finds a wider audience at home than it did in theaters, because I really enjoyed this one. MMA fighter Gina Carano makes a star-making debut (thanks largely to Soderbergh, who tailored the entire movie to her talents) as Mallory Kane, a freelance secret agent hung out to dry by her superiors and caught up in an international conspiracy involving private security companies, the CIA, MI6 and Chinese dissidents, among others. The fact that the conspiracy itself doesn't ultimately make a whole lot of sense doesn't matter one iota, because this is not a Tinker, Tailor sort of spy movie. It's an action spy movie, in the school of Bond and Bourne. Actually, despite Soderbergh's citing the early Bond movies as his primary influence, it really plays like a 90s Cynthia Rothrock action movie as envisioned by a first rate director and packed with top shelf talent. And I mean that as a total compliment. Haywire a whole lot of fun, and Soderbergh concocts one action scene after another that you haven't seen before. Co-stars Michael Fassbender, Ewan McGregor, Michael Douglas and Antonio Bandaras are all fantastic, but it turns out Carano didn't really need that kind of back-up, because so is she. And unlike some other female action heroes, she's completely believable kicking the asses of men twice her size. The film left me with no reservationst hat Carano could lick all comers in the movie's cast which is no small feat when that cast contains the combined might of Obi-Wan Kenobi, Magneto, Jack Colton, Desparado and a G.I. Joe! The disappointingly scant extras on both versions include the featurettes "Gina Carano: From MMA to Haywire" and "The Men of Haywire" as well as trailers; the Blu-ray also has a digital copy. That's too bad, because I would have really loved to hear a Soderbergh commentary track discussing his spy influences, or seen all the deleted material generated by significant reshoots, or the original ending. Oh well. Retail is $29.95 for the DVD and $39.99 for the Blu-ray, but both are currently available for half that on Amazon right now. Read my full review of the film here. 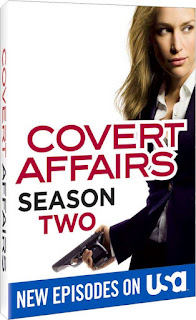 Also out this week, from Universal, is Covert Affairs - Season Two, a 4-disc, 16-episode DVD set. This USA spy show starring Piper Perabo, Christopher Gorham, Kari Matchett and the great Peter Gallagher (though never quite enough of him) got even better in its second season, and one impressive Berlin-set episode made my Best of 2011 list. There are even more actual foreign locations in Season 2, from Istanbul to Paris to Stockholm, and their presence really elevates this series above other spy shows that dress up Burbank as whatever locale that week's script calls for. Like Season One, Covert Affairs: Season Two is packed with bonus material. Extras this time around include deleted and alternate scenes, a gag reel, Piper Perabo's Comic-Con Intro (from last year's panel) and a featurette I'm particularly looking forward to called "Covert Affairs on Location." SRP is $39.98, but the set is nearly half that on Amazon right now! 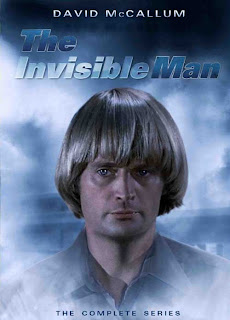 Finally, this week also brings us the long-awaited and thrice-delayed 1970s spy version of The Invisible Man: The Complete Series starring former Man From U.N.C.L.E. David McCallum and co-starring former Man of the World Craig Stevens. McCallum plays the invisible agent of the private security think tank KLAE, who's also the inventor of the formula that rendered him invisible. The 4-disc DVD set from VEI includes all 13 episodes of the short-lived series and retails for $24.98. If you want to see Illya's Seventies Purdy bob in high definition, however, you may want to hold off. The Blu-ray release has been delayed even longer, but is still in the cards for a release next month at the same price.
Posted by Tanner at 3:17 PM