Tradecraft: Pierce Brosnan Returns to Spying in The Coup 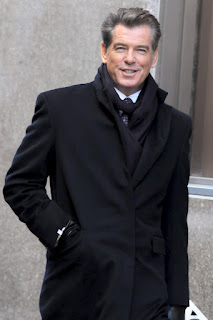 Deadline reports that former 007 Pierce Brosnan has joined the cast of The Coup, an intense action thriller in the vein of Taken in which an American family living in Southeast Asia find themselves embroiled in a violent coup as rebels take control of the city. Owen Wilson plays the dad who struggles to get his family to safety. Brosnan will play what the trade blog describes as "a mysterious government operative." Cool! I like it when Brosnan plays government operatives--and not just as James Bond. His best role to date (closely followed by The Matador) was as a far sleazier secret agent in The Tailor of Panama. Still, this sounds like a supporting part. I wish someone would cast Brosnan as the lead in a Taken-style mid-budget actioner. It would be nice to see him get the kind of career boost that film gave his countryman Liam Neeson. Until that happens, however, this will do nicely! According to Deadline, "Devil helmer John Erick Dowdle will direct [The Coup] from a script he co-wrote with his brother Drew Dowdle." Filming begins in October for Crime Scene Pictures, the company behind the upcoming remakes of Gambit and Suspiria.
Posted by Tanner at 5:19 PM

Sounds intriguing. I seem to recall not too long ago there was talk of Brosnan playing Bill Granger's worldweary spy Peter Devereaux, aka the November Man. I'm guessing that project is dead. And personally, I think Brosnan's best role was in 'The Fourth Protocol.'

It's funny, Le Samourai, but I was one of the ones who felt Pierce Brosnan was originally too lightweight to be James Bond. Then I saw "The Fourth Protocol" and, Man, was I wrong. While I feel the film's overall quality is spotty, Brosnan's icy, super cool, Soviet hitman just screamed "007!!"

I agree with you guys: Brosnan's great in The Fourth Protocol. But my favorite performances of his are still The Tailor of Panama and The Matador! I think Pierce (always sadly underrated) just gets better with age. He was great in The Ghostwriter, too.

I don't recall hearing about November Man, Le Samourai. Huh, that would be really cool! I hope it's still kicking, but, as you say, probably not. Same goes for that comedic project he was attached to a while ago, Spy vs. Stu. I liked the idea of Brosnan sending up his Bond image in a broad comedy (as opposed to a slick satire like The Matador), but we'll probably never see that come to fruition either.