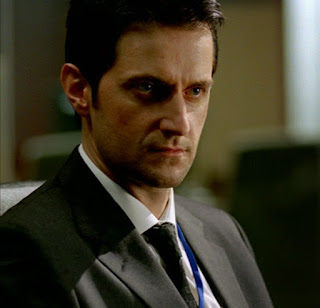 Richard Armitage has already toplined two spy series, having done a stint on Spooks/MI-5, and starred in the original UK version of Strike Back (review here). And now he's re-enlisted for intelligence duty to star in the EPIX series Berlin Station from spy novelist Olen Steinhauer (announced in May), as The Hollywood Reporter reported earlier this fall. Now, according to Deadline, the full cast has come together for the 10-part contemporary espionage drama. And it's a very good cast! Spy vets Tamlyn Tomita (24, The Agency), Leland Orser (Taken, 24), Richard Dillane (Argo, MI-5), and Bernhard Schütz (A Most Wanted Man) have rounded out a cast that already includes Armitage, Michelle Forbes (24, Global Frequency), Rhys Ifans (Snowden) and, as reported in July, Richard Jenkins (Burn After Reading).

According to the trade, Berlin Station follows Daniel Meyer (Armitage), a newly anointed case officer freshly arrived at the CIA's Berlin Station to uncover the source of a leak who has supplied information to a Snowden-like whistleblower. Guided by a jaded veteran case officer, Hector DeJean (Ifans) — a "darkly charming, tenacious agent" who works for Station Chief Steven Frost (Jenkins)" — Meyer "learns to contend with the rough-and-tumble world of the field agent — agent-running, deception, the dangers and moral compromises."

Tomita will play Sandra Abe, "a quiet presence lording over the efficient operation of Berlin Station while having an affair with her boss, Frost." Orser will play Robert Kirsch, "a devoted and successful Deputy Chief who digs intelligence out of the capital through a mix of force, diligence and cleverness." Dillane will play Deputy Liaison Gerald Ellman, "a gentle, reserved man who plans his transfer to Budapest, but finds himself in a position of being collateral damage." Schütz is Hans Richter, "an old-world spy who has risen, against all odds, to the highest ranks of the [German spy agency] BfV." Sounds like an ideal Steinhauer cast of characters!

Steinhauer is one of the best contemporary spy novelists (his "Bureau of Tourism" trilogy is the best spy franchise that Hollywood has so far, inexplicably, left unfilmed, despite multiple flirtations with the project), and this is one of the most exciting spy projects currently in development for me. Amazingly, it's not even the only Berlin-set cable series in the works from a master spy writer! William Boyd (author of the wartime espionage tale Restless and the James Bond continuation novel Solo, as well as my favorite novel of this century, Any Human Heart) is masterminding a Cold War period 10-part series, Spy City, for Gaumont International. I can't wait to see both.
Posted by Tanner at 4:11 PM