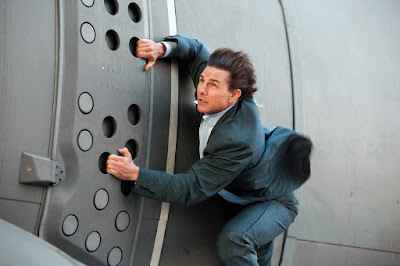 In a story about Luna Park, Tom Cruise's next collaboration with Doug Liman (The Bourne Identity), Variety reiterates that the star intends to shoot the next Mission: Impossible movie very soon—as soon as this summer. If that happens, we'll be seeing Ethan Hunt again in a much shorter timespan than the usually substantial gap between any two previous entries in the Mission: Impossible franchise. Before Mission: Impossible - Rogue Nation had even come out (let alone become one of the biggest hits of the summer box office) and back when John Stewart was still hosting The Daily Show (seems like a lifetime ago!), Deadline reported that Cruise was already touting a summer 2016 start date for his sixth Mission while on Stewart's show. On top of that, The Hollywood Reporter ran a story last August saying that before Doug Liman's Mena opens in January 2017, "Paramount now wants to shoot Mission: Impossible 6 during summer 2016 for release in 2017, probably in June or July." But if the recent Variety story is to be believed, it sounds like the movie might not shoot quite as soon as planned. According to that trade, "Sources now say if all goes well with [writer Jason] Fuchs’ draft, Paramount and Skydance would try to squeeze in [Luna Park] before the next installment of Mission: Impossible, which is currently being eyed for a summer 2016 shoot. Cruise is currently shooting Jack Reacher: Never Go Back, and he could jump into Luna Park afterward." If that happens, I'd say there's a chance that the next Mission might end up facing some delays, as Cruise, who also produces those movies, generally likes a bit of prep time for whatever latest insane stunt the writers have dreamed up. And speaking of writers, it's interesting that despite all this talk about shooting within a year, none of these stories have mentioned a writer being attached to the project. Or a director, for that matter! Yet presumably someone is writing it, if things are moving as fast as Cruise indicates. Remember, at one point the plan had been to shoot Mission: Impossible - Rogue Nation back in 2013 (Cruise even dropped out of The Man From U.N.C.L.E. so he could do that)... and that didn't end up going before cameras for another year. So while I certainly hope we get more Mission: Impossible sooner rather than later (coming off of the series' two best entries to date), I won't hold my breath just yet.

Incidentally, the plot of Luna Park sounds like it could actually be a Mission: Impossible movie... if the Mission series went in a Moonraker direction. According to the Variety story, it revolves around a group of renegades who venture to the moon to steal an energy source. I don't know, from dangling from the ceiling of the CIA to clinging to cliffs to swinging off skyscrapers to clinging to planes, Cruise seems intent on increasing the altitude of his signature stunts from mission to mission. After his external activities midair in Rogue Nation, he just might have to go to the moon next!
Posted by Tanner at 2:06 AM