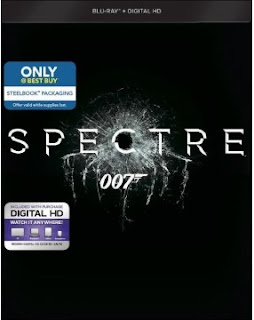 As seems to be the norm these days (infuriatingly, for consumers), SPECTRE hit Blu-ray today in North America in several different retailer exclusive configurations. This guide is not intended as an endorsement of this frustrating practice, but more of a consumer alert, a buyer beware, so you can make sure you choose the version that's best for you. First, there's the standard Blu-ray edition available from most retailers (including Amazon). The special features are annoyingly scant, but do include the excellent 20-minute featurette "SPECTRE: Bond's Biggest Opening Sequence," covering the Mexico City shoot of the movie's breathtaking pre-credits sequence and the film's premiere. This is the best James Bond Blu-ray special feature since the excellent Cloverland documentaries on the Casino Royale Special Edition. Besides that, all there is in the way of value-added material are the video blogs that ran on 007.com throughout production (all short EPK pieces), three trailers, and a rather disappointing gallery consisting solely of publicity stills and no production artwork or advertising campaign material.

Target offers their own exclusive edition that includes a bonus DVD (that's right, standard def) containing three additional special features totally over 20 minutes (a nice addition given the dearth of extras on the regular disc). "From Title Song to Title Sequence" (06:27) is a featurette about the making of the title sequence (which Mendes aptly describes as "a whole other film, a piece of art") and the song (and also the music video, complete with BTS footage), including interviews with title designer Daniel Kleinman, singer Sam Smith and director Sam Mendes (who praises Smith's controversial falsetto). "The Shadow of SPECTRE" (10:15) features writers Neal Purvis and Robert Wade discussing SPECTRE's history within the film series, past films in general, and Ian Fleming. It's basically a recap of things fans will already know. There's also a little bit at the end addressing how they tackled the villainous organization in the new movie. (Purvis: "Everyone was aware that if we're going to do SPECTRE, you've got to make it very different to how it was.") Finally, there's the music video for Sam Smith's somewhat lackluster theme song "Writing's On the Wall" (04:45). The video itself is quite good, and certainly should have been included on the standard Blu-ray.

Finally, Best Buy is offering their own exclusive edition in an attractive steelbook design featuring the octopus/bullet hole teaser artwork (pictured). The features are the same as the regular version. So if you value bonus material (like I do), you should opt for the Target disc to get maximum extras. If you value aesthetics and packaging, the Best Buy one might be right for you. And if you don't really care and just want the movie itself in an admittedly stunning HD transfer, just go for the regular version.
Posted by Tanner at 11:17 PM