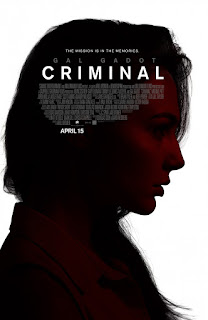 Criminal is a weird one with a great cast that we've been hearing about for a while now. (It was first announced in 2013, the cast firmed up in late 2014, and it was originally supposed to be released in August of 2015.) Here's the first trailer. It has an odd tone, but it's certainly very cool to see powerhouses Gary Oldman (Tinker Tailor Soldier Spy), Tommy Lee Jones (Jason Bourne) and Kevin Costner (Jack Ryan: Shadow Recruit) in the same room together! The plot, as best I can make out, finds the CIA putting the mind of a deceased agent (an oddly un-billed Ryan Reynolds, despite being the first name mentioned in the studio's synopsis on YouTube) into the body of a hardened criminal (Costner) in order to access his memories and, presumably, complete his mission. Why they would choose a criminal as the vessel I still can't parse out, but hopefully the movie explains it. I'm glad, at least, that this time it's Reynolds' character being put into the body of a more interesting actor (because I'd certainly rather watch Costner in this kind of movie) rather than vise versa, as in last year's Self/Less wherein Ben Kingsley's mind or soul was put into Reynolds' body. (I think Reynolds is excellent in Deadpool. I just don't tend to like him in more serious roles, like Safe House.)

Criminal opens April 15, from Lionsgate. Alice Eve (Men In Black 3), Gal Gadot (Fast Five), Michael Pitt (Boardwalk Empire), Scott Adkins (The Bourne Ultimatum) and Robert Davi (Licence to Kill) round out the impressive cast. Ariel Vroman (The Iceman) directs from a script by the team behind The Rock (1995), David Weisberg and the late Douglas Cook.